The magnificent Lar National Park is located in the central Alborz Mountain Range and near the southwestern foothills of Mount Damavand. It’s between Mazandaran and Tehran provinces about 70 km northeast of Tehran and has an overall area of 73500 hectares; however, approximately 31000 hectares of it is the actual protected area. This breathtaking Iranian National park includes two different ecosystems: the aquatic ecosystem and the Montane ecosystem. Being the natural habitat of various animal and plant species, Lar National Park is protected by the national department of the environment due to its special features and unique wildlife.

There are no cities or villages inside or in the vicinity of this park, giving you the opportunity to admire the beauties of this intact part of paradise on earth.

The mighty Damavand peak and its western ridge- the most symmetrical face of the mountain- are visible from Lar National Park.

Furthermore, Lar Lake, or so-called Lar Dam is one of the best attractions of this amazing national park and is located 20 km away from the city of Lar. Lar Lake can be seen from Damavand peak on clear days and is a sign pointing to the west. This beautiful lake is also visible from Damavand’s southern route when you reach nearly 4000 m of elevation. 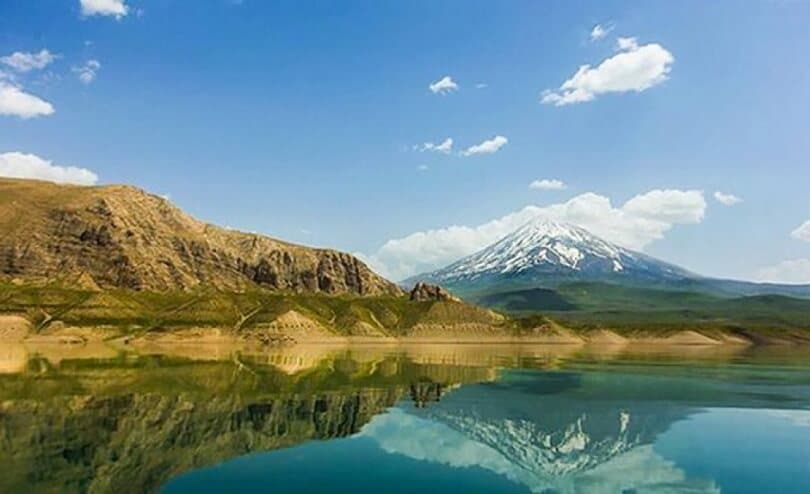 Lar National Park is the natural habitat of many animal and plant species due to its climate and the existence of several rivers. Almost all animal species found in the central Alborz Mountain region can also be seen in this area. The variety of wildlife in Lar National Park is one of its most interesting features.

Various animal species can be found in Lar national park due to its special location.

Lar National Park is home to a total of one hundred bird species with the most famous one being the golden eagle, a unique bird only found in Iran. Various bird species such as Partridges, Caspian Snowcocks, Great Egrets, Grey Herons, Cormorants, Kestrels, Cranes, common Buzzards, and Eagles can be seen in different seasons. This makes Lar National Park a very attractive destination for Birdwatching Tours.

Lar National Park is also the natural habitat of many mammals such as red Mouflons, Sheep, wild Goats, Leopards, Wolves, Bears, Foxes, Wild Boars, and Jackals. The population of some of these mammals has grown in the past few years as a result of living in a safe environment. Furthermore, many reptiles and amphibian species, and aquatic animals can be found in Lar area such as Latifi’s Vipers (Lar valley viper), Meadow Vipers, Monitor Lizards, Frogs, Lizards, Montpellier snakes, and brown Trout which is a unique fish species.

A total number of 400 plant species belonging to 48 plant families exist in Lar National Park. Among these various species, 338 live in the area permanently and 35 are only found in Iran. The variety of plants found in Lar National Park is one of its unique and interesting features. Some of these plants are edible and have medicinal properties. These special plants include Milkvetch, Great Mullein, Yellow Salsify, Mushrooms, Chicory, Persian Hogweed, Liquorice, Sirak, Piazak, Ramson, Lavash,  Mountain Tea (also called shepherd’s tea), and Broadleaf Plantain. In addition, Lar National Park is covered by beautiful flowers such as Iris, Woolly Buttercup, and Lar Poppy, turning it into stunning scenery. This region is also used for beekeeping due to the existence of meadows and a variety of plants. The beekeeping season in Lar National Park is usually from June to September every year. In our Damavand Tours, the travelers have the opportunity to buy a jar of fresh Damavand Honey from the beekeepers and take it as a souvenir back home.

Lar national park and its surrounding area is a popular ecotourism destination because of its breathtaking landscapes, amazing natural attractions, and wildlife. This region is also used for research projects. If you have some time after climbing mount Damavand or on your way to Mazandaran province make sure you won’t miss the astonishing beauties of Lar National Park and Lar Lake.