You are here: Home1 / Iran Deserts

Dasht-e kavir and Dasht-e Lut, including an area of 360,000 km², are the most famous deserts in Iran and two of the top most interesting yet undiscovered places in the country.  Lut desert is one of the hardest areas on earth to travel through. Some parts of this vast desert are completely devoid of living creatures including bacteria. 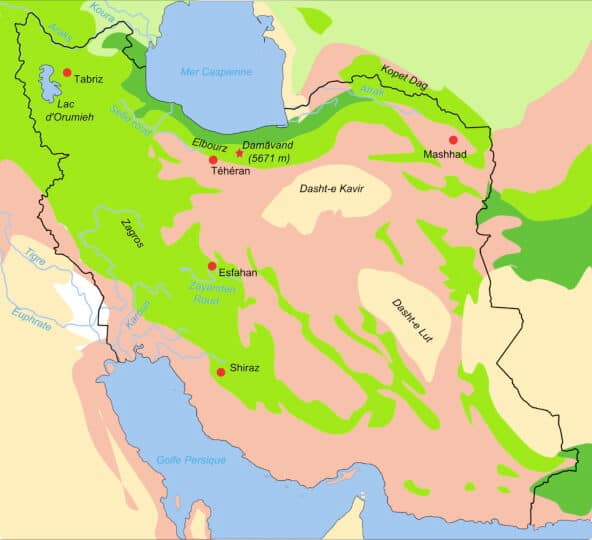 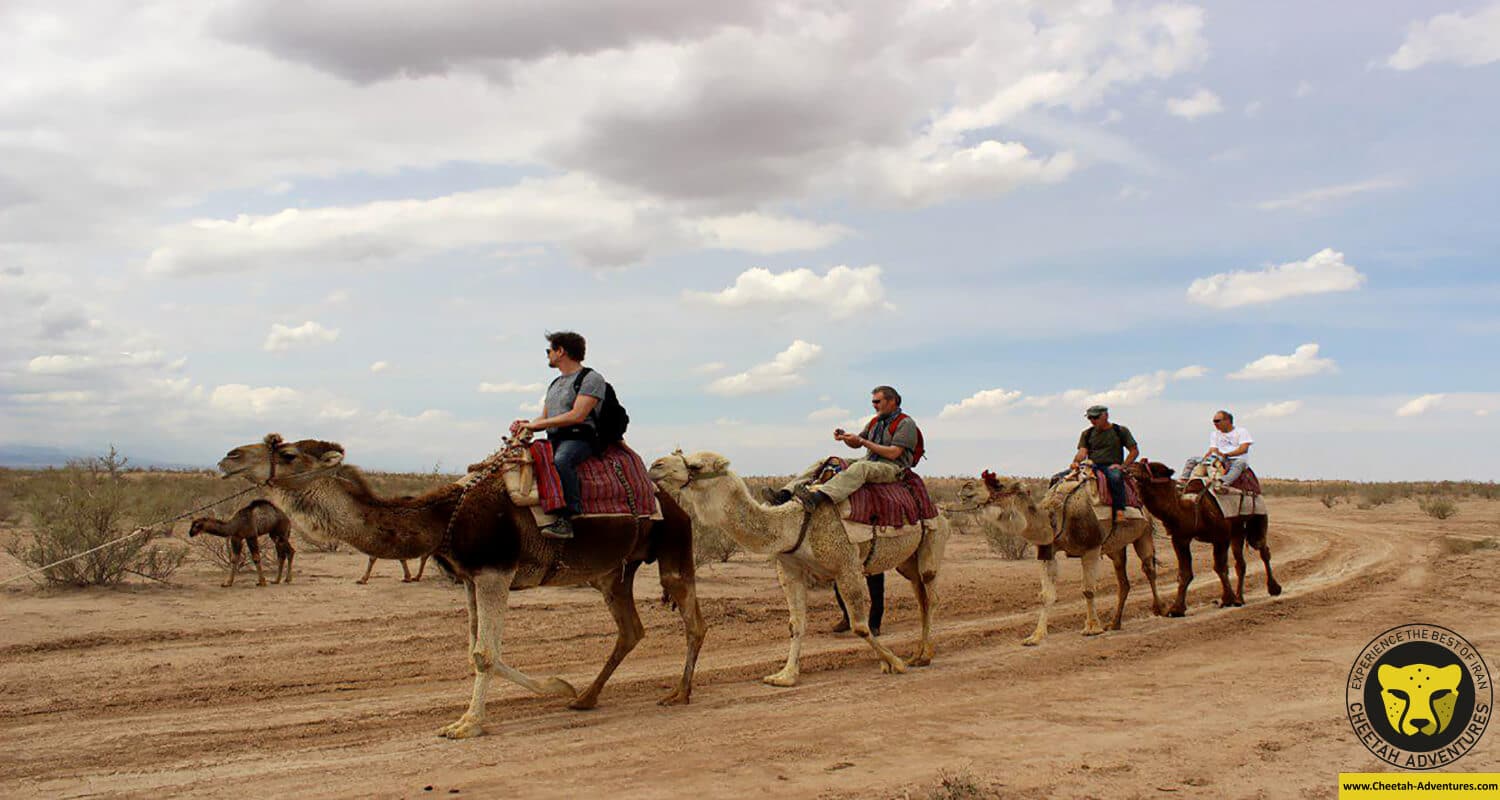 Dasht-e Kavir or the central desert

Dasht-e Kavir, 300km long and 400 km wide, is the largest desert located in the Iranian plateau. Some of the most important parts of this desert include; dangerous swaps found in the southern and central parts, the areas covered by sand dunes, areas covered by clay and Himalayan black salt and the areas devoid of plant life .In addition,  craters resembling volcanic crates can be seen in the central parts of the desert, created as a result of rapid evaporation and low density of the soil. The lowest spot of Dasht-e Kavir is the northern part with 650 m of altitude above sea level and the highest spot, 838 m, is located north of Namak Lake and Biaybanak village. Among the significant plant species of this region Alhagi, Acantholimon,  Atraphaxis, Haloxylon,Tamarisk are mentionable . Various animal species such as gazelles, Pseudocerastes, Cheetahs, Rueppell’s foxes, Caracals, Sand cats, Persian Onager and Golden Eagles can be seen in this desert area.;However; the major part of Dasht-e Kavir is devoid of plant life and the ground is low, causing dreadful swamps after small amounts of rainfall. As a result, crossing the desert without prior research and thorough study of the wet season isn’t recommended.

The Mesas in Dasht-e Kavir are among the most unique attractions of this vast desert. Mesa is a geological term for spots in the desert that are higher than the surrounding area with the peak being flat. The erosion due to severe winds blowing in this area has flattened the peak of these hills over time, creating the fascinating phenomenon seen today. Takht-e Aroos and Takht-e Abbasi are some of the most beautiful Mesas in this area.  Located south of Dasht-e Kavir and in Isfahan province, Takht-e Aroos enchants every visitor with its beauty. 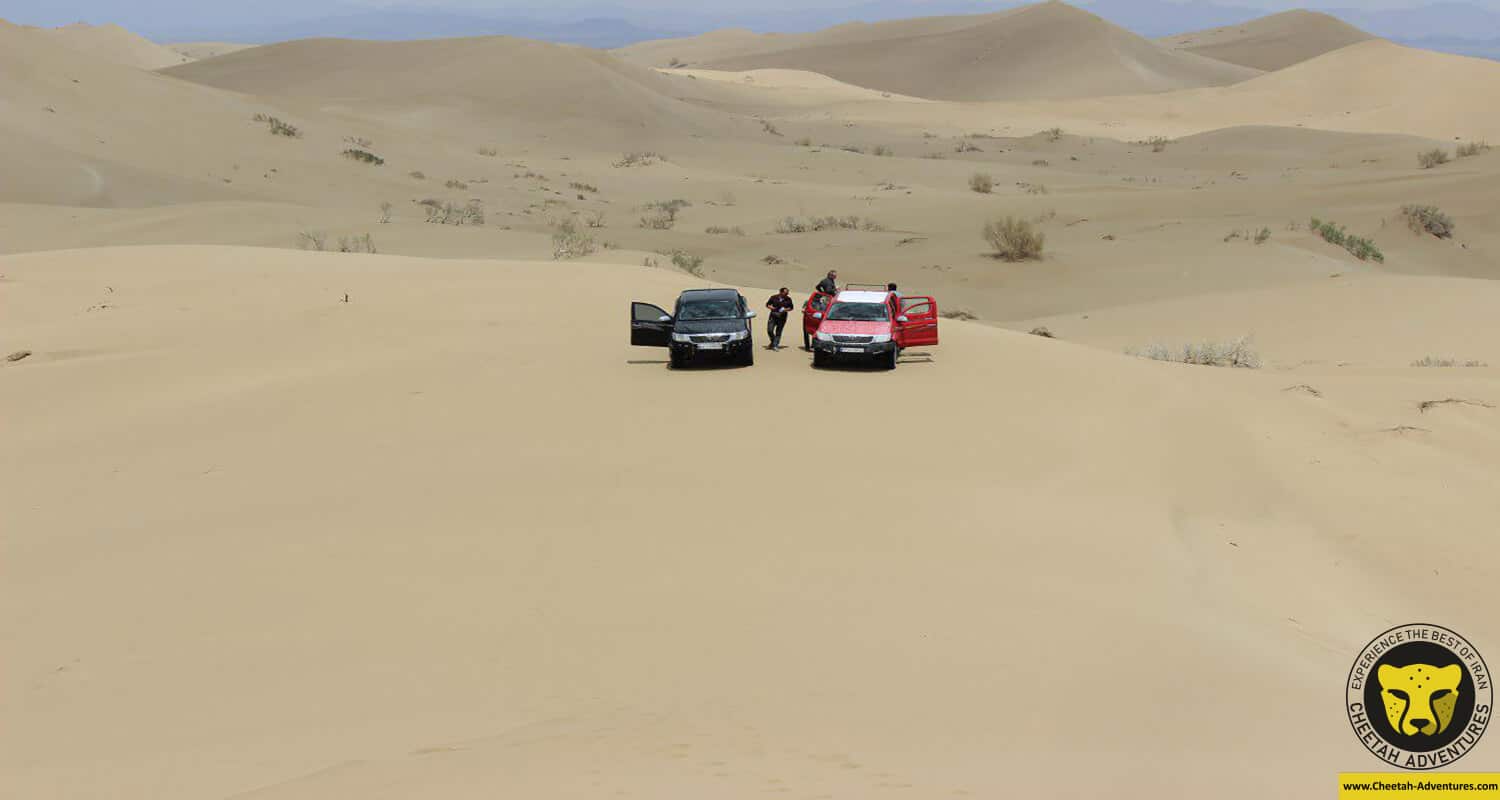 Some of the other magnificent attractions in the central desert are the following:

Rige-e Jenn, also known as the Bermuda triangle of Iran, is a desert area in Dasht-e Kavir. It is devoid of any living creatures and includes vast sands and swamps that can be dangerous for any living creature. There are no accurate data about the wildlife of this region available; however, Persian zebras and Chinkaras can be seen nearby. Rig-e Jenn includes several sand dunes and salt swamps. This area is one of the hardest worldwide to pass through. It has never been on the route of the convoys passing by and even today there aren’t any roads or villages in the area . Only a few researchers have decided to explore this area. Ancient Persians considered this place the home of evil spirits and demons as they believed no one can survive passing through it. 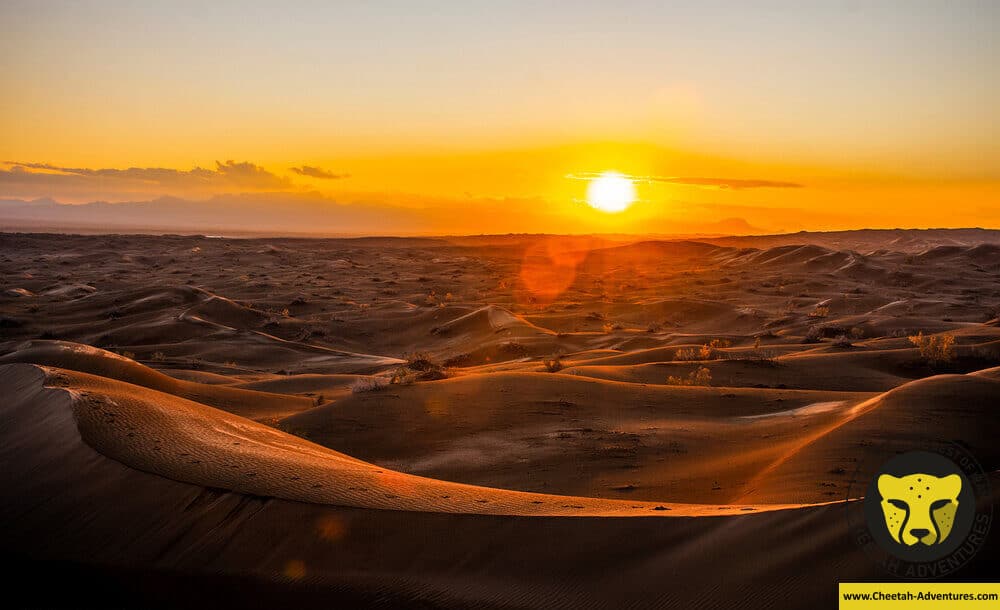 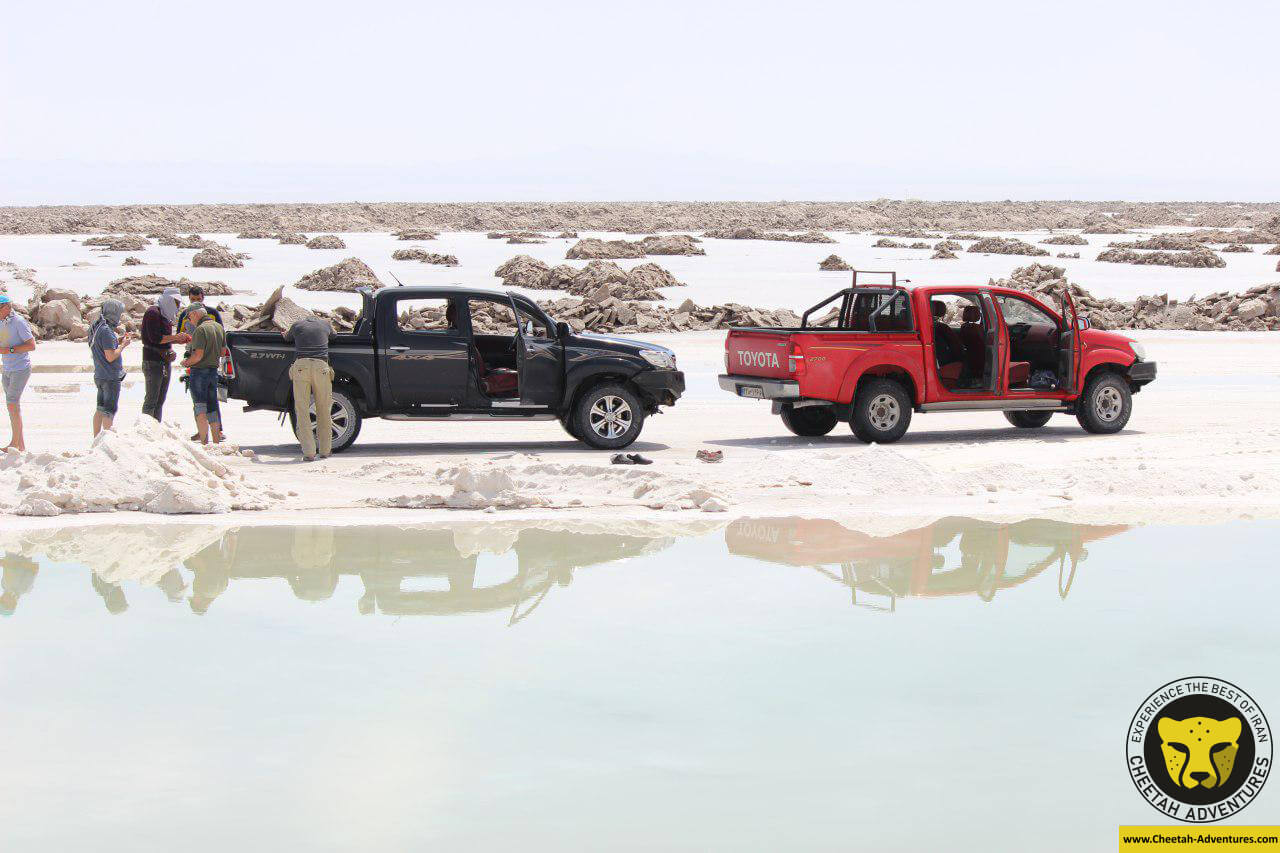 Namak Lake is located in Dasht-e Kavir, the central desert of Iran, and between Isfahan, Qom and Semnan provinces. This Lake is shaped like a triangle pointing north with a base of 35 km, height of 38 kilometer and a total area of 3000 km². 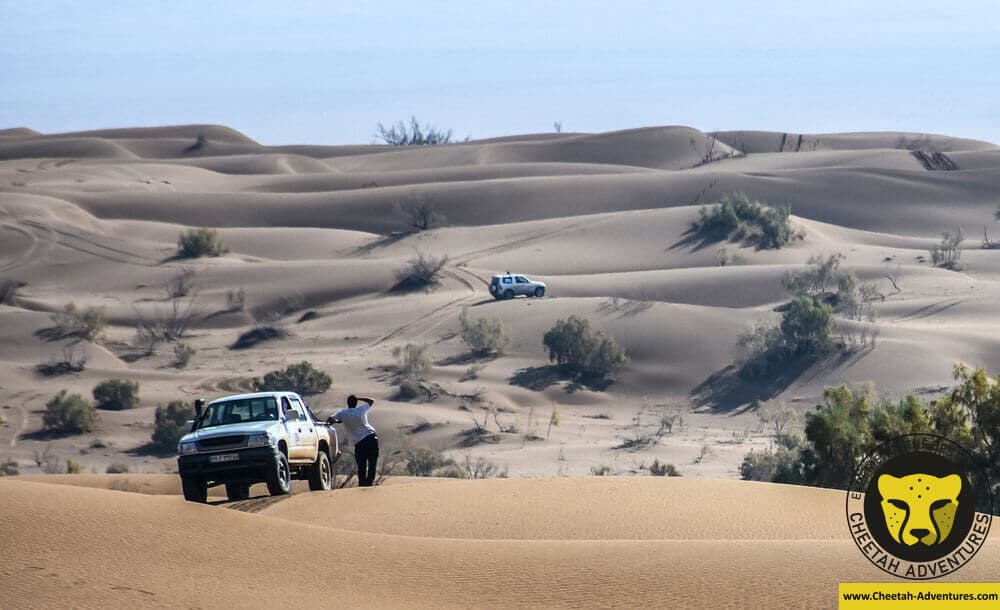 Kavir National Park is one of the oldest and largest protected areas in Iran. The major part of this valuable area is located in Garmsar( Semnan province) and some  small areas are considered parts of Tehran, Qom and Isfahan provinces. The total area of this region is 670,000 Hectares with 420 Ha considered a national park and the rest a protected area.

The variety of wildlife living in this region had given it the nickname of little Africa in the past. Although today less species are seen in this area it is still the home of many desert species found in Iran. Kavir National Park is one of the 9 wildlife refuges (natural reserve) in Iran

Maranjab desert is located north of “Aran o Bidgol ” city in Isfahan province. The average elevation of this desert is 850 meters higher than the sea level. Safety, balance, various attractions and variety of wildlife have made Maranjab a  suitable place for tourism and investment and attract many visitors yearly. The major part of this desert is covered in sand dunes and sandy areas and the vegetation is rich. The majority of the plants found in this area are salt-tolerant species such as Tamarisk and Haloxylon . The wildlife of this area is also diverse due to the abundance of food and water. Some of the animal species found in this area are Rueppell’s foxes, sand cats, Monitor lizards and various types of other lizards, snakes, scorpions and eagles. In addition, last year a pair of cheetahs was spotted in this area. The magnificent sand dunes and stunning Haloxylon jungles have made Maranjab desert one of the most beautiful desert areas in Iran.  In addition, Namak Lake and Sargardan Island are some of the other amazing attractions of the Maranjab desert. 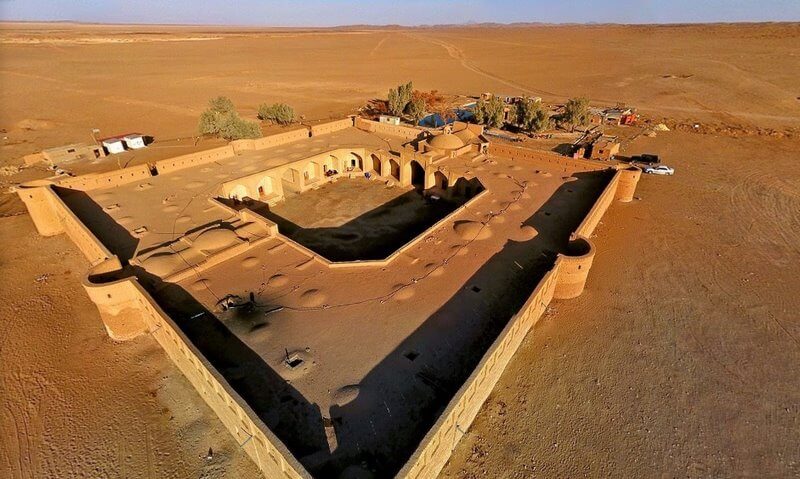 The caravanserai of Maranjab is located near the southern edge of Namak Lake.  The small lake located outside the caravanserai is a result of the combination of a saltwater spring and a freshwater spring, the existence of which in the middle of the desert has stunned many geologists. 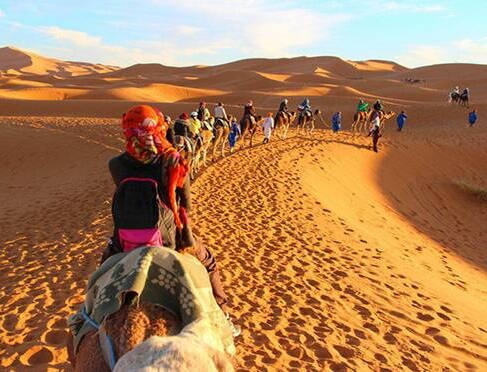 Mesr village is located in the territory of Khur and Biyabanak County in Isfahan Province. It’s 45 km east of Jandaq and 60 km north of Khur . Mesr is also known as the sea of sand of the desert. With its fascinating landscapes, Mesr village is one of the most charming attractions in Iran. This magnificent village includes several attractions such as Amir Abad district, an area covered by sand dunes and Tamarisk and Haloxylon shrubs, that is located 2 km away from the village. Farahzad village is another one of Mesr attractions and is famous for its beautiful date palm trees.

Matin Abad eco camp is located 25 km south of Natanz and 60 km southeast of Kashan. This accommodation facility was built near the great sand dunes called” Posht Rig” and south of Namak Lake. It is the first ecocamp in Iran, constructed with the purpose of improving stable tourism and preserving the wildlife of the area. The United Nations declared Matin Abad complex one of the top18 ecotourism sites in 2014. 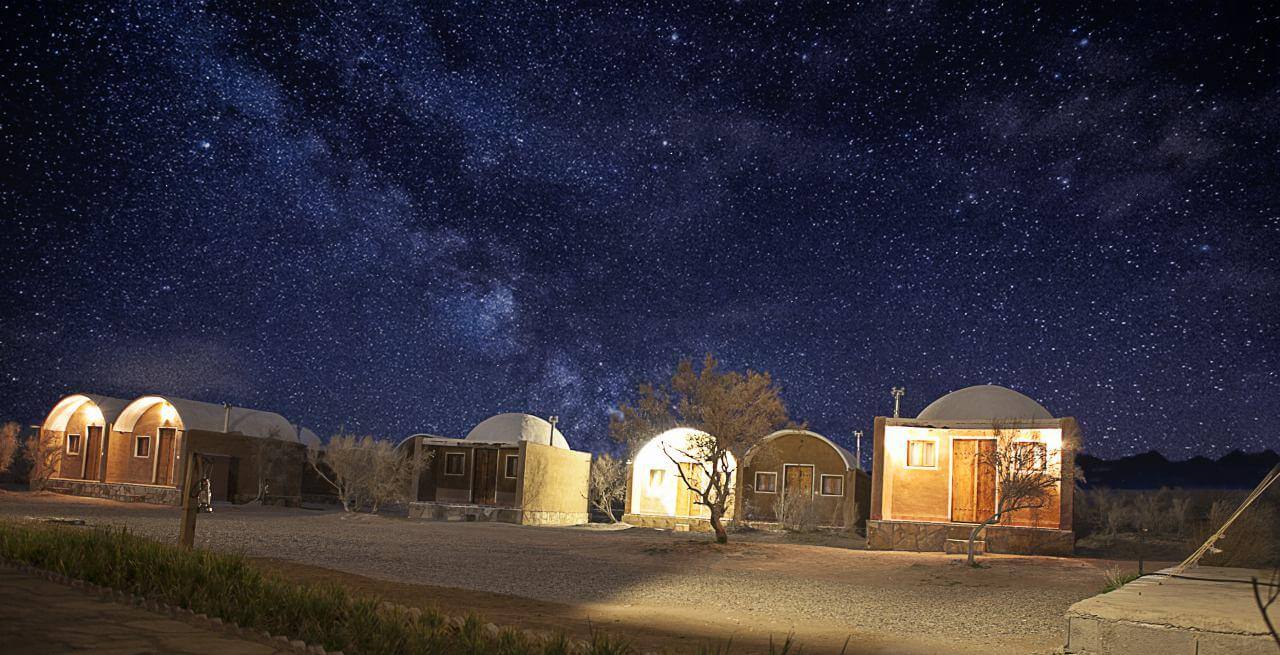 Located in the southeastern part of Iran and northeast of Kerman Province, Lut desert includes one of the hottest areas on earth. The Lut Desert is also The world’s 25th largest desert, with an area of 51,800km. Lut desert includes parts of Khorasan, Sistan and Baluchestan and Kerman provinces. This vast desert includes the tallest sand pyramids in the world with some being almost 480 meters. Dasht-e Lut is divided into three parts based on type of terrain and geographical distribution of each area. These parts are known as the northern, southern and central Lut. Northern Lut is covered by grit and sand and central Lut includes gigantic hills and sand dunes which make it the most amazing part of the desert. The richest vegetation seen in the desert is in the southern part of Lut desert.
Lut desert is considered the hottest place on earth based on the satellite pictures taken in 2004, 2005,2006,2007,2008 and 2009. In addition, the highest temperature ever recorded on earth is 70.7 Celsius degrees and belongs to the Lut desert. The previous record happened in 1992 and belonged to Libya with 56 degrees.

Before the UNESCO world heritage committee session held in Istanbul, all of the 19 world heritage sites located in Iran were historically significant. As a result of this session, Lut desert which had been on the UNESCO tentative list alongside Persian Qanat was chosen as the first natural world heritage site of Iran. Explore Iran deserts in our Iran Desert Tours.

Some of the unique features making Lut desert worthy of this title are the following: 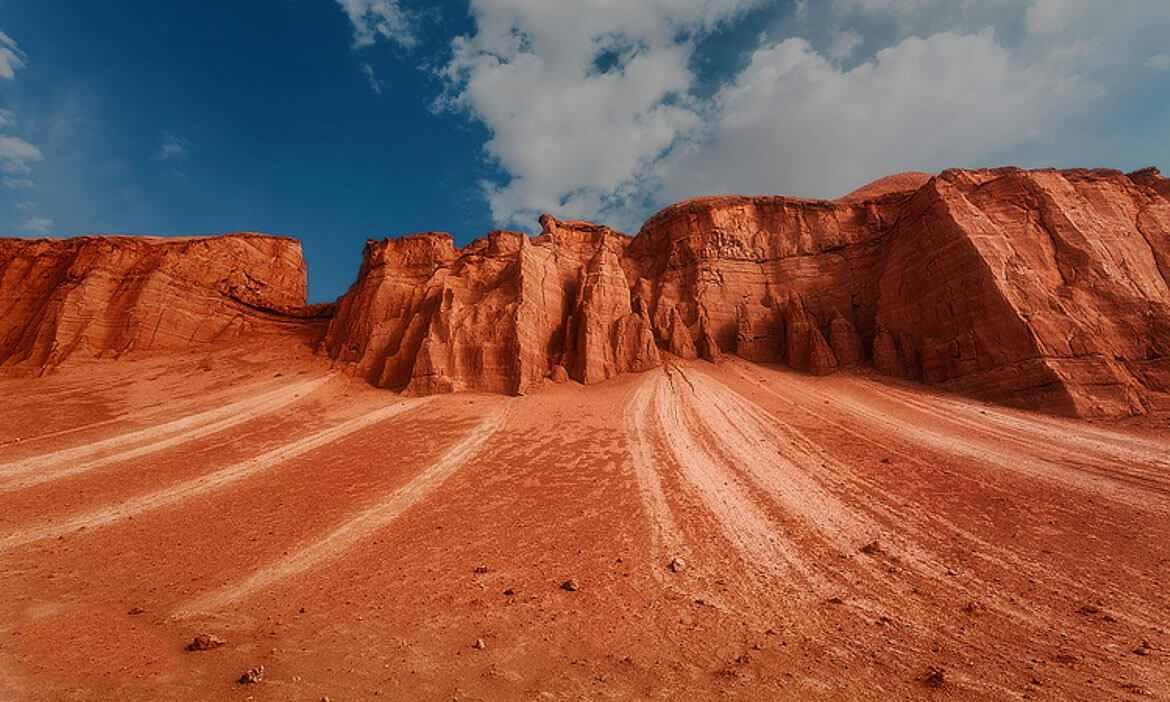 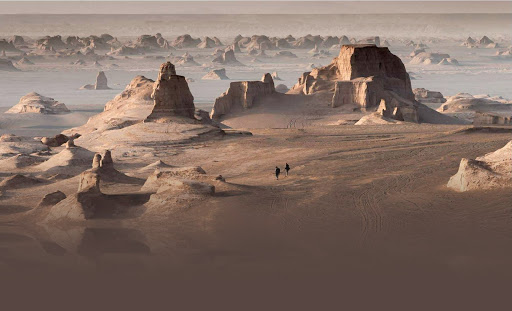