Mount Sabalan complete guide: everything you need to know about Sabalan mountain

Mount Sabalan (Savalan in Azerbaijani) is the third most prominent peak in Iran with 4811 meters of altitude and is located in the northwestern part of Iran in Ardabil province. Scientists believe Sabalan to be a potentially active volcano; however, there is no information on its last eruption. The sulfuric springs, hot springs, and emission of dense gases are signs of its potentially-active state. The lake located on the Soltan peak (the main peak of Sabalan) makes it one of the unique mountains in Iran. This magnificent lake is one of the most beautiful lakes in Iran. It’s nearly 16 meters deep and is frozen for most of the year. This lake alongside the peaks of Mount Sabalan and the natural glaciers attracts many mountaineers yearly. Soltan peak is the most popular due to its high altitude and its beautiful lake. Mount Sabalan is one of the Iranian national heritages.

Sabalan is considered holly by those believing it to be the place where Zarathustra – the prophet of the Zoroastrian religion- was chosen. It is mentioned in “Thus spoke Zarathustra”, a book by Friedrich Nietzsche, that the prophet ascended Mount Sabalan. It is also believed that parts of Avesta, the holy book of Zoroastrianism, were received by Zarathustra on top of the mountain and that he spent years praying in the foothills of Mount Sabalan. Many of the inhabitants of Azerbaijan and the nomads of the region consider Sabaln to be holy. Sabalan was believed to be one of the seven holy mountains of heaven in the past and people would climb if often to pray on the top. Respect to the mountain can still be seen as people refer to it as “Sultan Savalan”. 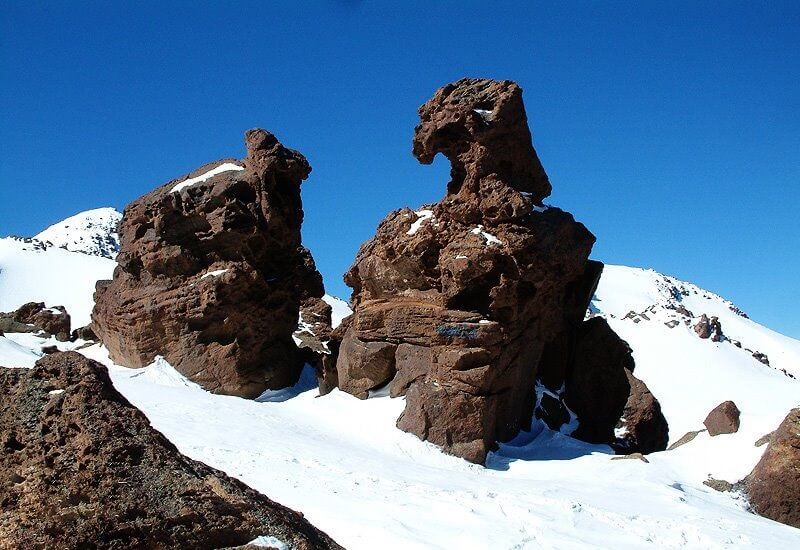 Nomads living in the foothills of Sabalan

Three nomadic tribes spend their summer in the foothills of Mount Sabalan with the most famous being Shahsevan nomads. They are the third-largest nomad tribe in Iran after Bakhtirair and Qashqai tribes. Shahsevan nomads settle down at the foothills of Sabalan mid- May and relocate to the higher parts in July and August. They descend to the foothills in September and leave for Mughan plain as the weather gets cold in November. Nomads living in the foothills of Sabalan

Mount Sabalan has 5 peaks of which Soltan Peak (4811) is the third most prominent in Iran after Damavand and Alam-Kuh. Soltan peak is only one meter higher than Mont Blanc, the most prominent peak in the Alps. Heram Dagh and Kasra are two of the other peaks in Sabalan. Heram Dagh has three peaks of its own. These peaks are technically difficult to conquer and are between 4500 and 4600 meters high. Kasra is the third highest peak of Sabalan with 4470 meters of altitude.

Due to its vast territory, Mount Sabalan highly affects the climate and vegetation of the northwestern part of Iran including western and eastern Azerbaijan provinces. This region is covered in snow for most of the year and the precipitation is between 400 and 700 mm a year. In addition, permanent natural glaciers can be found in Mount Sabalan. 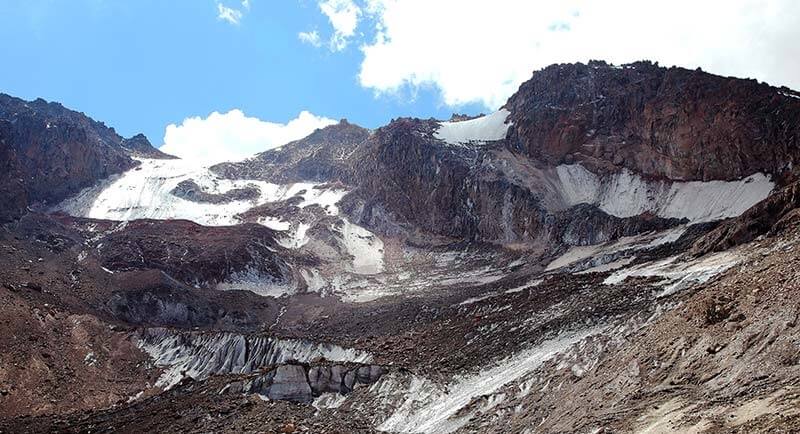 The high season of Sabalan trekking starts in mid-June and goes on until mid-September. During this time the weather is stable and the temperature is the highest of the year with the lowest being -10 degrees at night and 0 at day. Climbing Mount Sabalan is possible with summer equipment at this time of the year thus many mountaineers choose to climb this beautiful mountain then.

There are three main Sabalan trekking routes. They are the following: 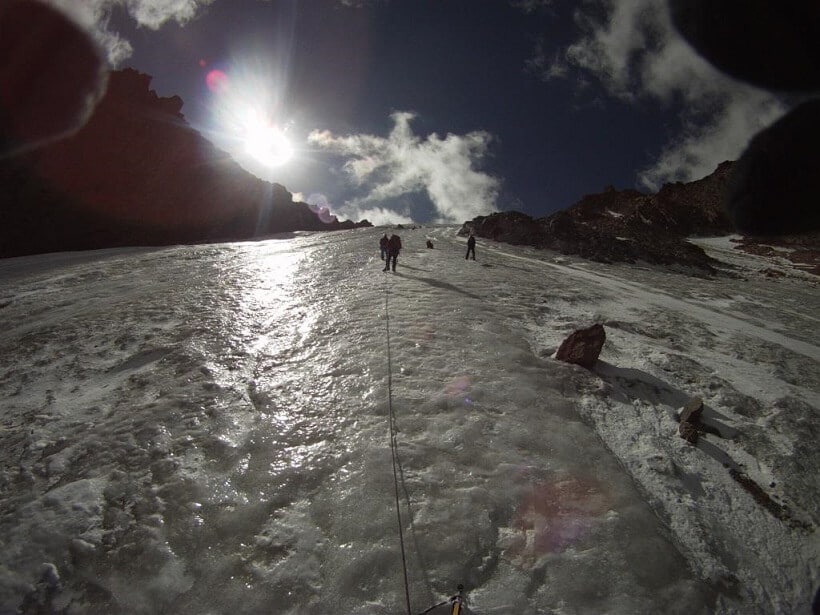 The North Glacier of Mount Sabalan 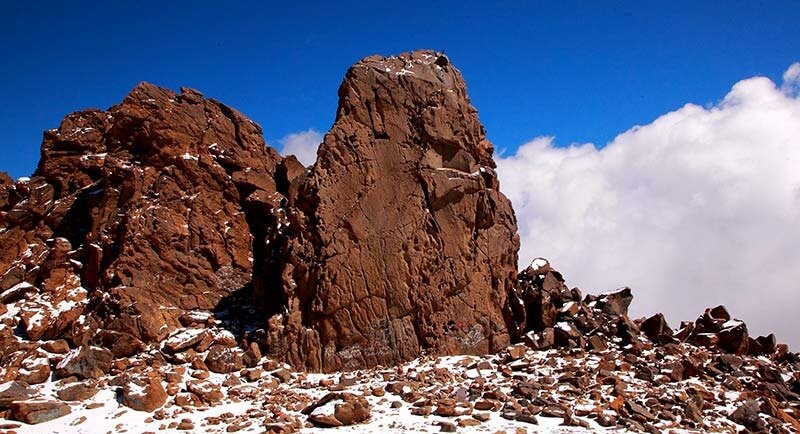 Northeastern hut: This hut is located on the northeastern Sablan trekking route at 3700 m of height and is known as Masjed( meaning the mosque) or Hoseyniyeh. This hut is reachable via a 10km long dirt road starting at Shabil hot spring. The northeastern consists of several stone-made rooms each including wooden or metal bunk beds. There is also a small shop inside to buy groceries and food but it’s best to buy everything you might need from the city as there are limited options available at the hut.

Western hut: The western hut is located on the route to conquering Heram and Sultan peaks at 3800 meters of altitude. This hut is accessible via the dirt road reaching Qarah Gol Lake from Sarbanlar village.

Western shelter: This shelter is located west of Sultan peak at 4200 meters of altitude and is the closest shelter to the peak. It consists of a small room with a maximum capacity of 10 people. The eagle-shaped rock near the western shelter has become the symbol of Mount Sabalan over the years. It is known as Ghartal Dashi (meaning the eagle rock in Azerbaijani Turkish) and is shaped like a seated eagle facing east.

Kasra shelter: This shelter is located on the route for conquering Mount Kasra. 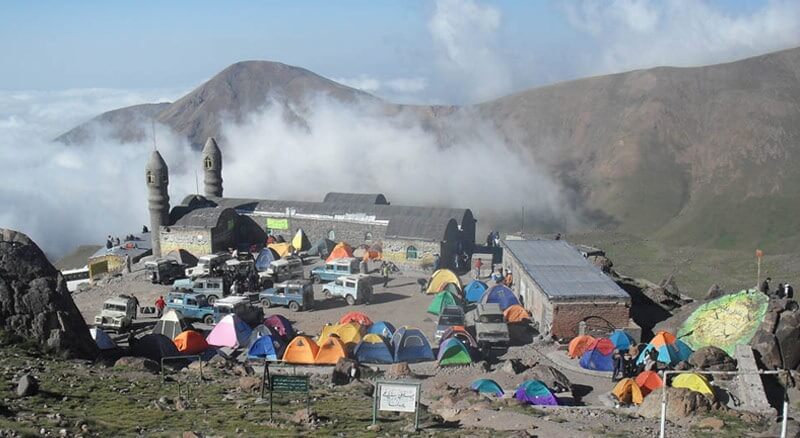 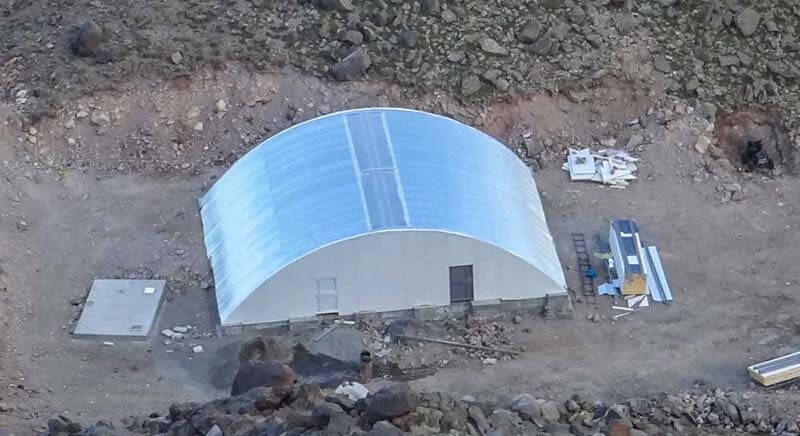 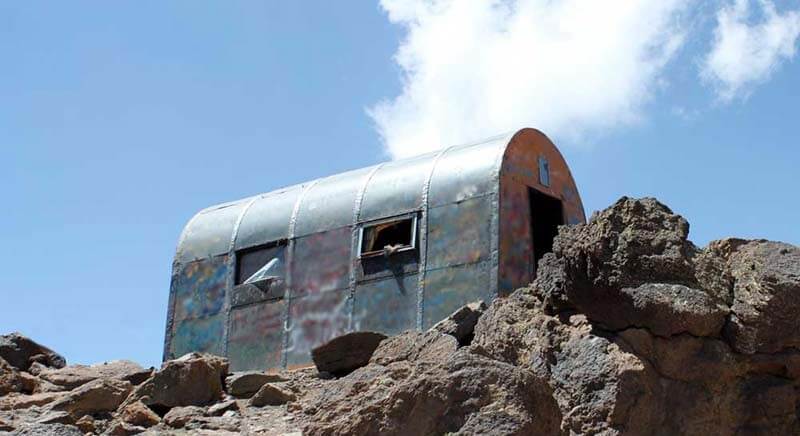 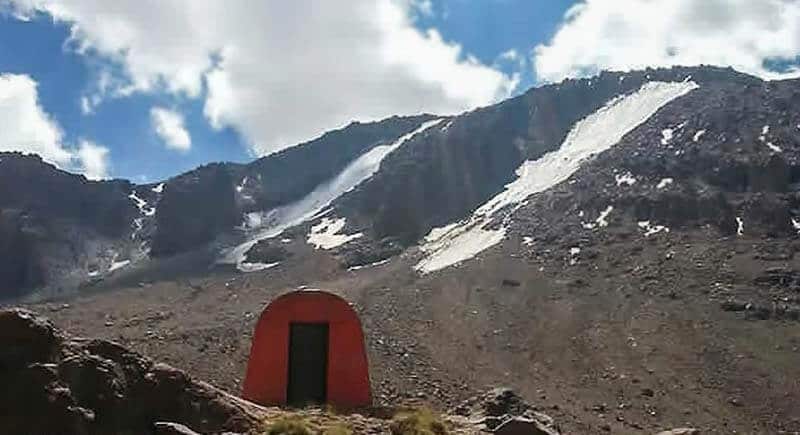 Mount Sablan and its surrounding area are among the most verdurous parts of Iran. This area has diverse wildlife and is one of the best natural destinations in Iran during the summer.

Mount Sabalan and its surrounding area have rich soil, causing the existence of a variety of plants. The lower parts of the foothills are covered in steppe plants and meadows can be seen in the upper parts. Mount Sabalan is covered in plants that are adapted to its climate and type of soil. Some of the most important plants growing in this region are the following: peppermint, roses, Irises, stocks, buttercups, barberry bushes, garlic, cloves, rose madders, Echium, and tulips.

More than 11 wildlife habitats were reported in the Mount Sabalan region. Many animals including several types of mammals and reptiles live in this area. Some of the mammals found in the area are mountain goats, rams, bears, hogs, foxes, rabbits, jackals, and weasels. There are several bird species found in the area such as Caspian snowcocks, owls, sparrows, golden eagles, sparrow hawks, hoopoes, larks, swallows, barn swallows, and crows. Among the reptiles found near Mount Sablan agamas, lacertids, skinks, dice snakes, and several poisonous snakes can be named.

Note that many have reported seeing brown bears near the northeastern hut at night. The cause is considered to be the accumulation of the food leftovers. Brown bears at the foothills of Mount Sabalan

Attractions and things to do near Mount Sabalan

Those who chose the western or northeastern Sabalan trekking routes to pass through Shabil to get to the beginning of the route. Shabi hot spring is the result of the volcanic activities of Mount Sabalan and is proof of it being potentially active. Shabil hot spring is clean and freshening, making it the best place to relax after trekking in Sabalan. 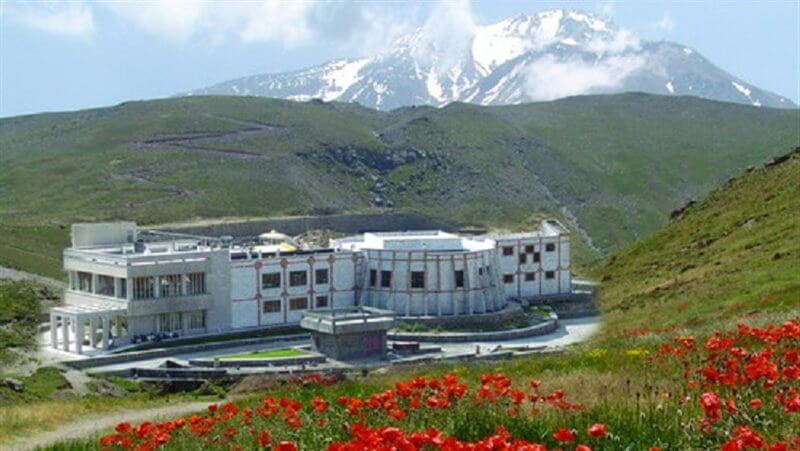 Alvares ski resort: Alvares ski resort is one of the best ski resorts in Iran and attracts many ski enthusiasts daily. It is located in Alvares village, a village located at the southern foothills of Mount Sabalan and 30 km away from Sarein.

Alvares ski resort is ready to welcome skiers almost 8 months a year and for those not interested in skiing it’s still worthwhile to stop by and enjoy the magnificent landscapes.

Trekking: Mount Sabalan attracts many mountaineers during the summer. Hiking can be very enjoyable in the foothills of Sabalan as nature is stunning during summer. You can also trek up to the summit using the necessary equipment.

Sarein: Sarein is a well-known and popular destination among Iranians, especially nature-lovers. Visiting Sarein can be a multi-purpose trip as this city includes amazing natural and historical attractions. The natural clean hot springs of Sarein are its best and most famous attractions. 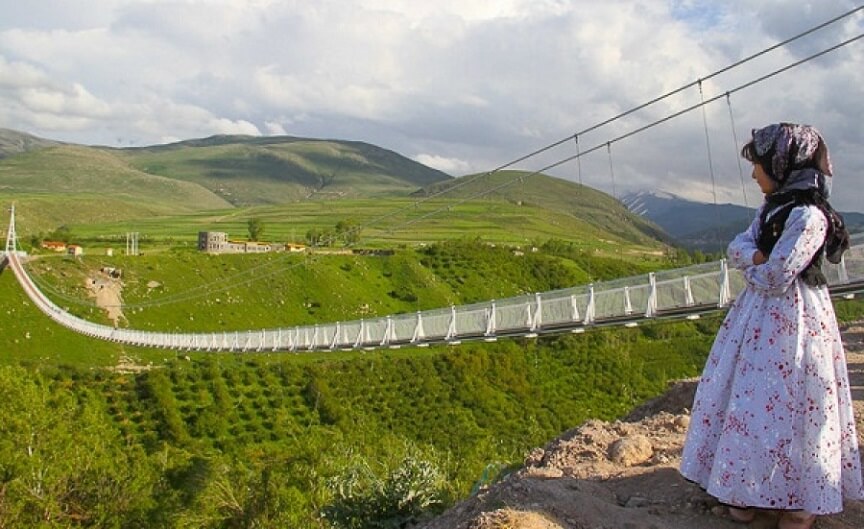 Alvares ski resort is one of the best ski resorts in Iran and attracts many ski enthusiasts daily. It is located in Alvares village, a village located at the southern foothills of Mount Sabalan and 30 km away from Sarein.

Alvares ski resort is ready to welcome skiers almost 8 months a year and for those not interested in skiing it’s still worthwhile to stop by and enjoy the magnificent landscapes. Mount Sabalan attracts many mountaineers during the summer. Hiking can be very enjoyable in the foothills of Sabalan as nature is stunning during summer. You can also trek up to the summit using the necessary equipment. Sarein is a well-known and popular destination among Iranians, especially nature-lovers. Visiting Sarein can be a multi-purpose trip as this city includes amazing natural and historical attractions. The natural clean hot springs of Sarein are its best and most famous attractions. 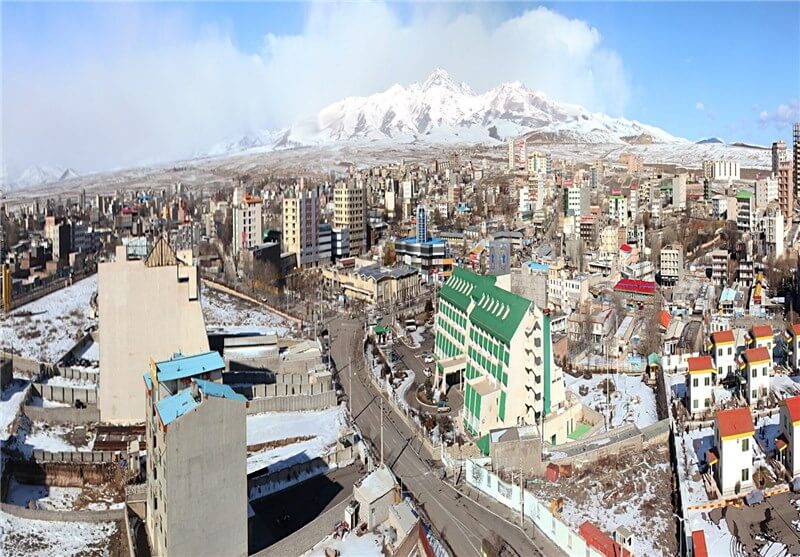 Sarein, famous for its hot spring pools and spa, Ardabil

Shahar Yeri is an ancient archeological site near the city of Meshginshahr in Ardabil Province. The total area of this historical site is 400 hectares and it consists of three parts: a military fortress, a temple, and an ancient hill called Ghoosha Tappe. The fortress and the temple of Shahar Yeri date back to 1450 B.C and Ghoosha Tappe belongs to almost 7000 B.C. This impressive archeological site includes 280 ancient menhirs that are estimated to be from 8000 B.C. Overall, Shahr Yari is estimated to be from the Late Bronze Age, the Neolithic, the Chalcolithic, and the early Iron Age. 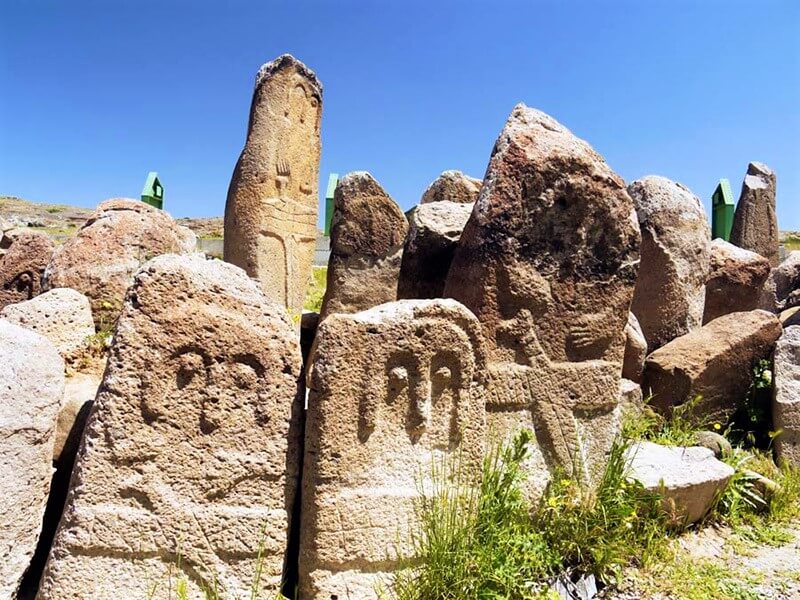 Back to Iran Destinations