You are here: Home1 / Culture of Iran2 / Chaharshanbe Suri, the Persian Festival of Fire

According to the Old Persian calendar, each year consists of 12 months, and each month, of 30 days. Consequently, the year would only have 360 days, which is shorter than the complete solar year by about five days. 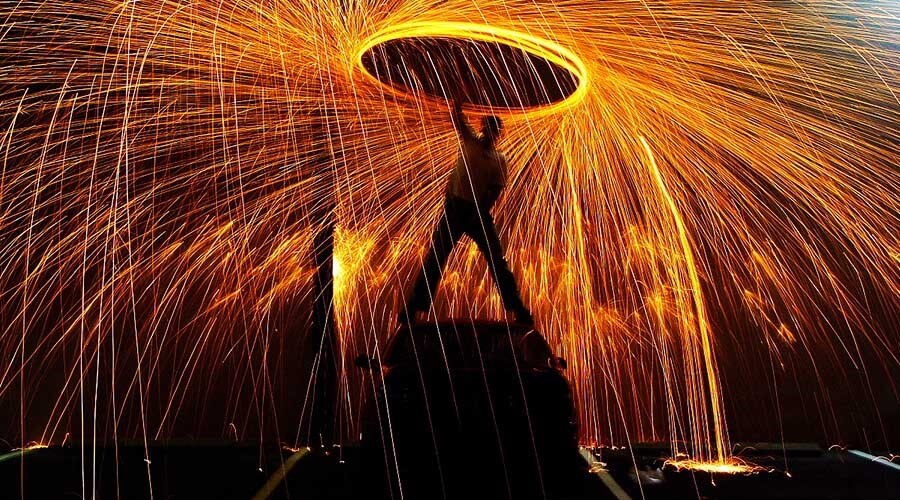 Iranians would dedicate these five days to preparations and celebrations for the New Year to come; to spring-cleaning; to putting the house together for the tradition of visiting each other after the turn of the year.

And on the night of the last Wednesday of the year, meaning on Tuesday afternoon and at dusk, they would light a fire outside their door. The family, children and adults alike, would jump over the burning woods and chant an old song:

Which translated would mean:

“May the yellowness of me (the fire), come from you (your complexion)

May the redness of you (your cheeks), come from me (my heat).”

Asking the fire to give them the zest and energy that the New Year (Nowruz) calls for; so that they could leave the sadness and worries of the past year to the flame to burn, and begin anew with happiness and joy. 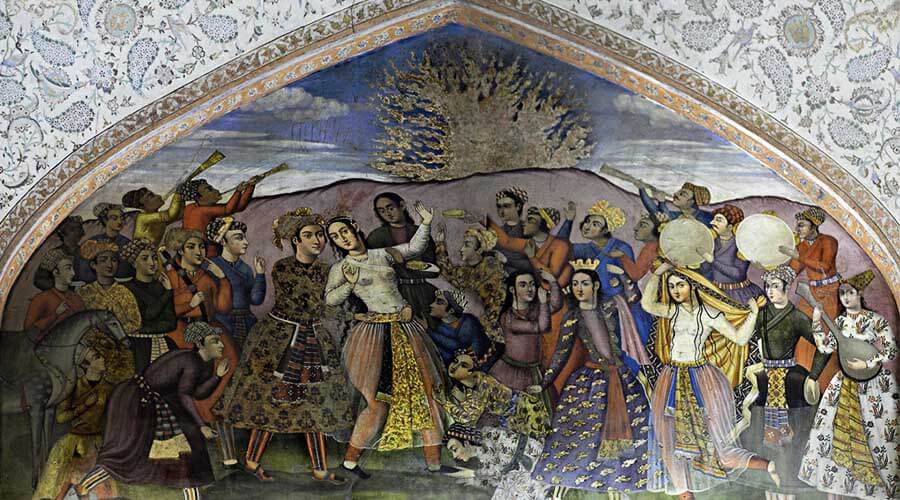 Iranians of the past believed that the grime and soot of the past year must not stain the new. Since not all dust and soot can be so easily cleansed, they would call on the aid of the fire, since fire was believed to be the source of purity. After all, fire and its smoke always rectify and repel the badness (as well as pesky insects). 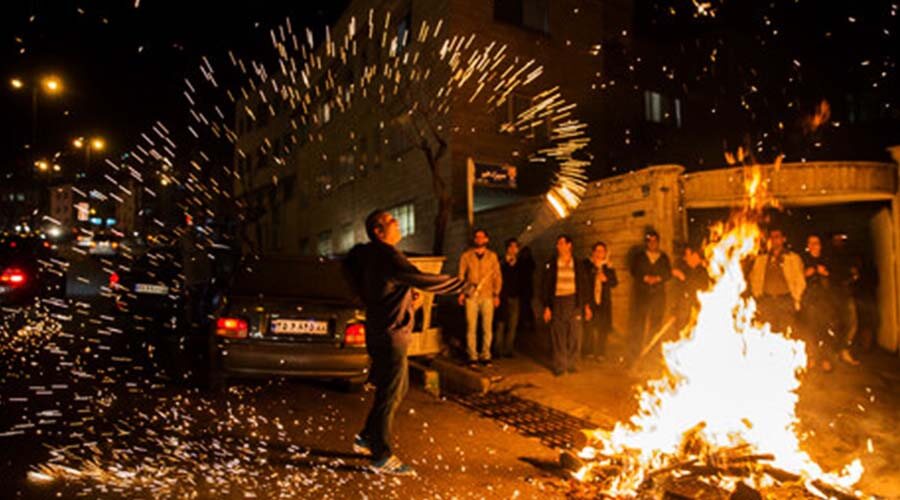 The last Wednesday of the year (Charshanbe Suri) is celebrated in varied and colorful ways across the provinces of the country. Some of the traditional rites remain alive in some regions of the land. These include: 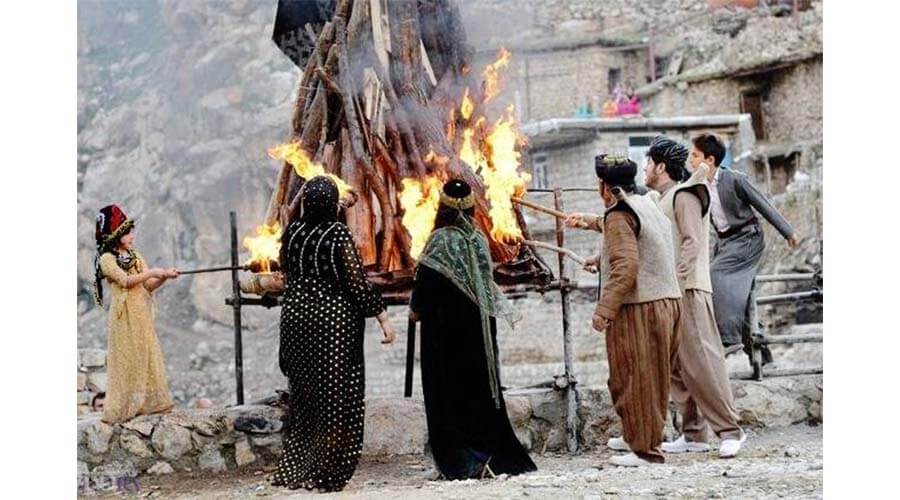 The people of Zahedan, Semnan, and some of the towns of Qazvin rub warm Halva on their faces in celebration.

This is one of the oldest traditions of the people of Kurdistan. As the night fell, it would become hard to recognize the faces. At this time of night, those who wished to marry soon would leave their homes, and listen in on the conversations of strangers and neighbors. If the first thing they caught was happy news, the omen was good and their chance of marriage in the following year, high. If the first thing they would overhear was sad news, they would consider it a bad omen. 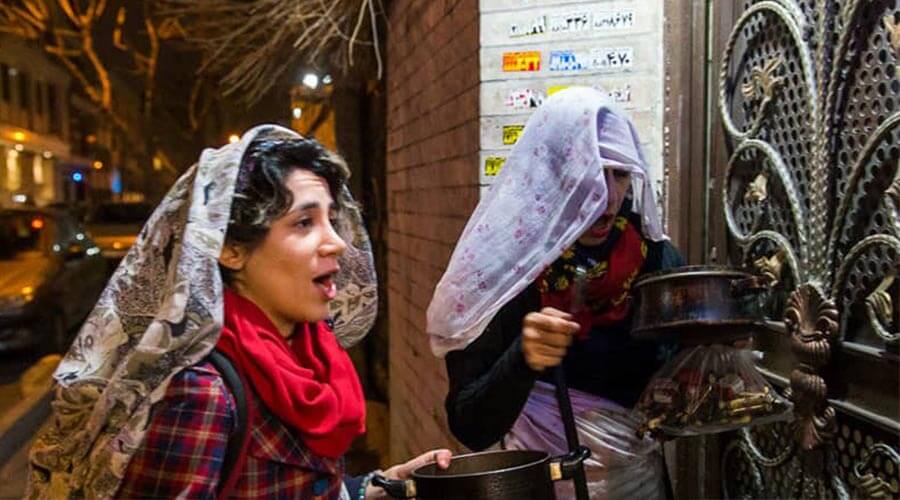 In this celebratory rite, young men and women would cover their faces with a Chador, and go knock at the doors of their friends and neighbors. The owner of the house would come to the door when they heard spoons and cutlery clanging against pots and pans and would gift them Ajil-e Chahar Shanbeh Suri (Trail mix, with the recipe special to Chaharshanbe Suri), candy, sweets, and money. Girls who would go on this adventure wished to marry sooner.

Reciting the Shahnameh, also known as The Persian Book of Kings around a fire used to be a popular Chaharshanbe Suri tradition. Usually, the oldest of the family would gather the children and tell them epic tales and stories. Those who had a talent for music and played an instrument would begin to play too and improvise or recite poetry about the beauty of the approaching season, and the year. This tradition is commonly celebrated on Shab-e Yalda, or Night of Yalda, as well, so ingrained it is in the ancient culture of this old land. 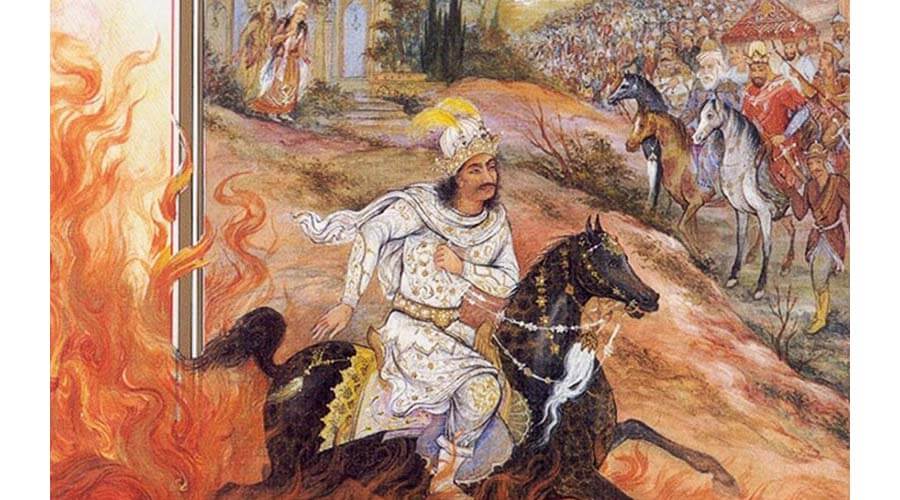 In older times, after the celebrations, the family would gather to roast the last of the seeds and nuts that they had from the past winter with salt and eat them together. These included the seeds of watermelon, sweet melon, pumpkins, as well pistachios, hazelnuts, almonds, hemp seeds, and wheat. They believed that in those who ate this elixir, enmity and malevolence would be warded off; kindness and sympathy replacing it for the following year. 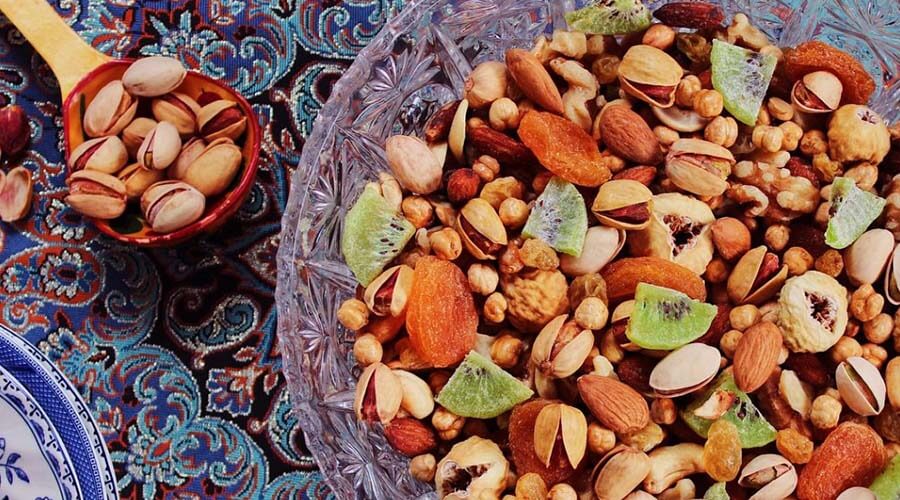 Dishes and snacks of Chaharshanbe Suri

Aush-e Aboodarda, or Aash-e Aboodarda, made with the same ingredients as Aash-e Reshte, is a type of thick soup made with seven types of legumes. This Aush is prepared for the members of the family who suffer a disease, or that have a “Hajat” (wish and prayer). The family prepares and distributes the food, hoping the prayer of those who eat it will hasten the fulfillment of their need. 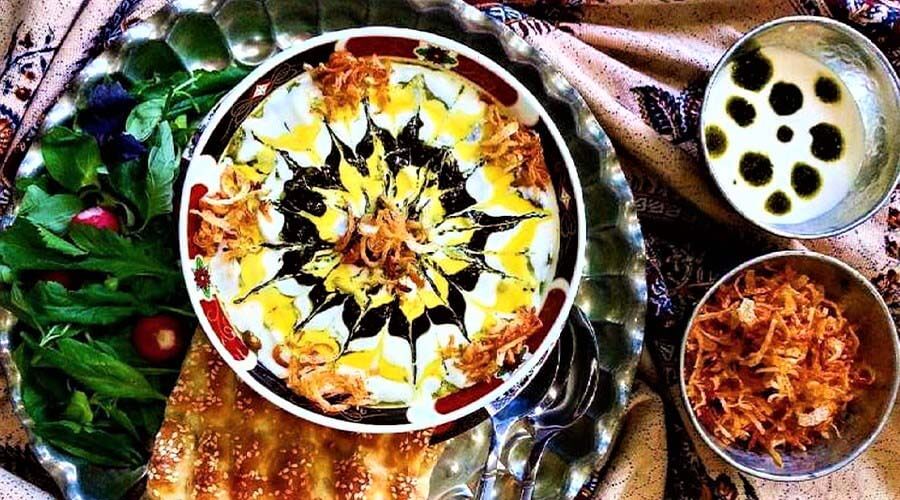 One of the popular snacks of the night is Ajil-e Moshkel Gosha or Haft Maghz.

In some regions of Khorasan Province, the people cook four dishes of Polo or rice foods; Reshte-polo, Zereshk-polo, Adas-polo, and Mash-polo, in order to distribute them among the poor and occasionally, friends and family. The Ajil that they prepare in this area has no salt since salt would symbolize bad luck. 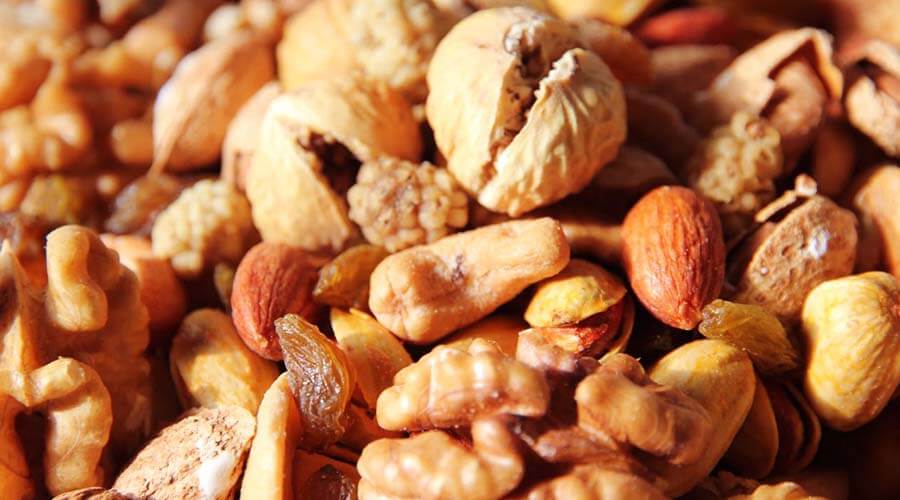 One of the delicious dishes of Zanjan for the Festival of Fire is Shesh Andaz. The ingredients of this dish include grape Molasses, oil, onions, dates, raisins, and eggs. The stew is served with rice with saffron, or with Reshte Polo.

The Gilaks, the residents of the province of Gilan, prepare their dish of “Torsh-e Tare” and have it with Kate rice and yogurt. In Mazandaran, different types of Aush are prepared; such as Aush-e Haft Torshi, which has seven sour ingredients (its namesake), and legumes and vegetables. 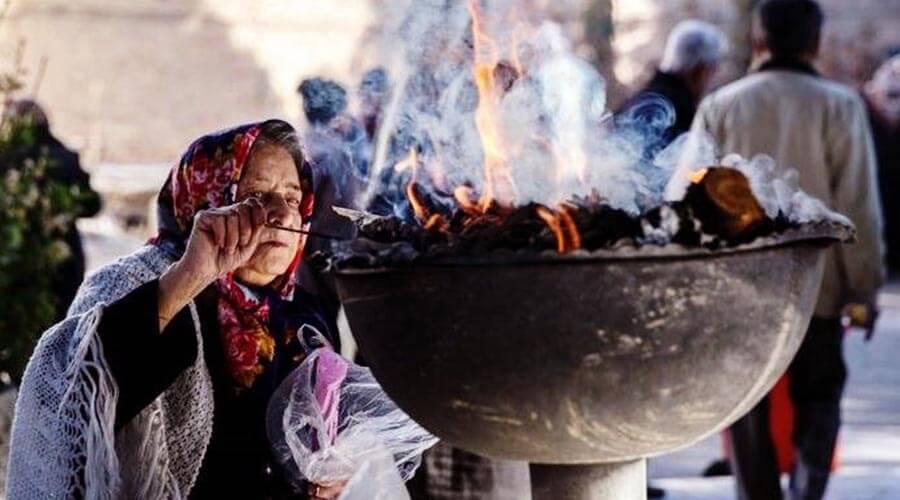 Nowadays, one of the most common celebratory rites is the gathering of people around fires and jumping across them. Unfortunately, roman candles and other noisy fireworks have gained popularity as well, which pose health risks. The dangers might even prove fatal when the situation gets out of hand in some parts of the country. This always disheartens families and destroys the joy of celebrations. Therefore, much of the cultural aspects of these celebrations have changed or become forgotten. Which of the activities are safe?

Usually, the celebrations begin from about six in the afternoon until near midnight. People will light fires, and if the neighborhood is not particularly religious, they might gather to play music and dance in the streets.

Overall, unless you are accompanied by a group of friends, it is best to stay indoors in the afternoon. Since the accidents with the fireworks of the recent few years have been known to cause serious injury in some cases, it is best to walk around the town with total caution.

We recommend that you join the activities that your tour leader recommends and organizes. Visit a village in which the older traditions are celebrated, or enjoy the afternoon in a park or neighborhood where the fireworks are supervised by the municipality or other authorities; in such events, your safety will be ensured. 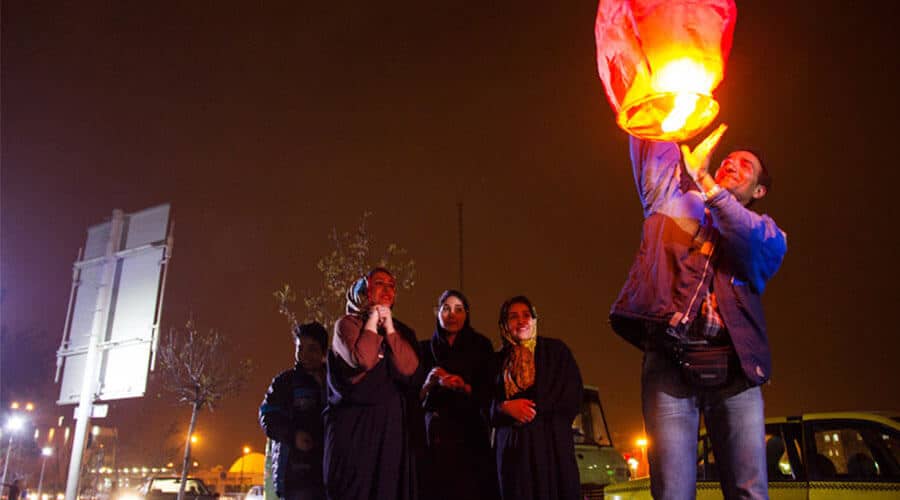