Many different types of cuisine and many accompanying ingredients circulate all around Iran, as it is a vast country made up of varying tastes and cultures. For instance, people in the north of Iran enjoy sour stews, while those in the center famously put a lot of pepper in their food.

This article tries to surmise some of Iran’s popular herbs and spices.

Sumac is a sour-tasting, dark red spice that we produce in Iran in tonnes, by crushing and pulverizing the dried flower of a plant from the Rhus family. 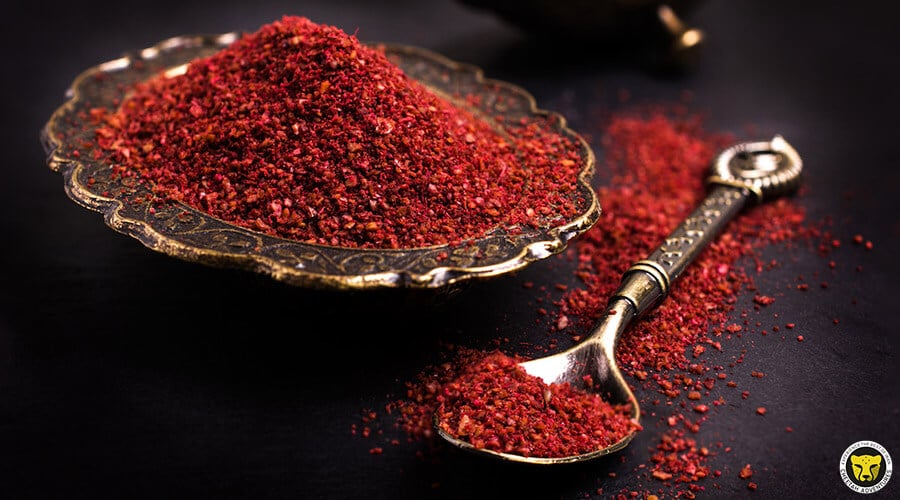 We put it in many dishes. It goes well with stews, broth, or rice.

In the northern regions of Iran, we like to use this slightly sour, indigenous spice as the main ingredient for a dish called Sumaq-polo (polo means rice in Farsi پلو).

We also tend to bring Sumac to the table to put it atop Koobideh Kebab to add a bit of flavor, as well as benefit from its effects to lower cholesterol. (Read more about TOP TEN IRANIAN DISHES)

We even make tea with it sometimes, as Iranians love to drink tea in the afternoon, and not just regular black tea.

You may have heard of this spice as a component of the Haft-Sin table. You remember right! This is part of the tradition of the turn of the year.

In Farsi, the name for Tumeric is Zard-Choobeh. Zard is yellow, and Choob means wood of a plant; therefore the nomination is self-explanatory. Turmeric is one of the most commonly used spices in our cuisine, as well as in India and Pakistan. To make Tumeric, one must crush the dried-up root of Curcuma longa finely. The powder has a rich yellow-orange color and can be used for dying materials as well. 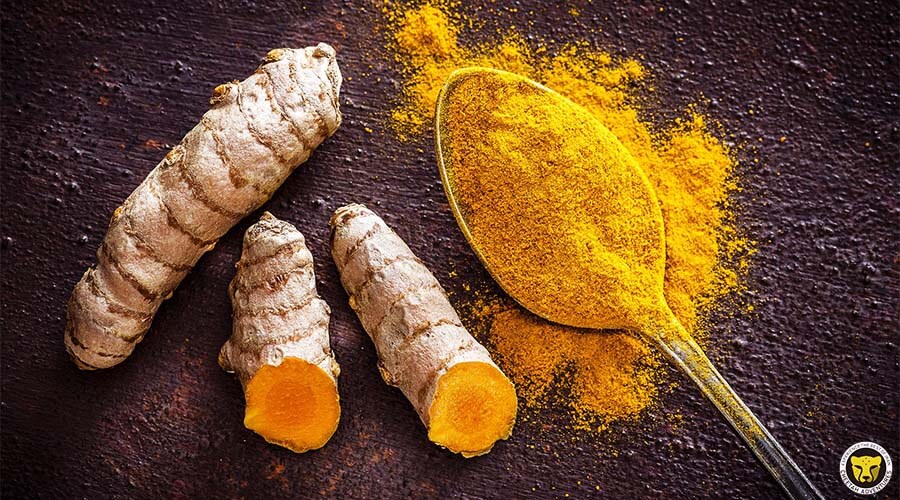 Tumeric makes up a large portion of curry spice; but we use it separately as well when preparing chicken stews, Ghorme Sabzi, or Kotlet. 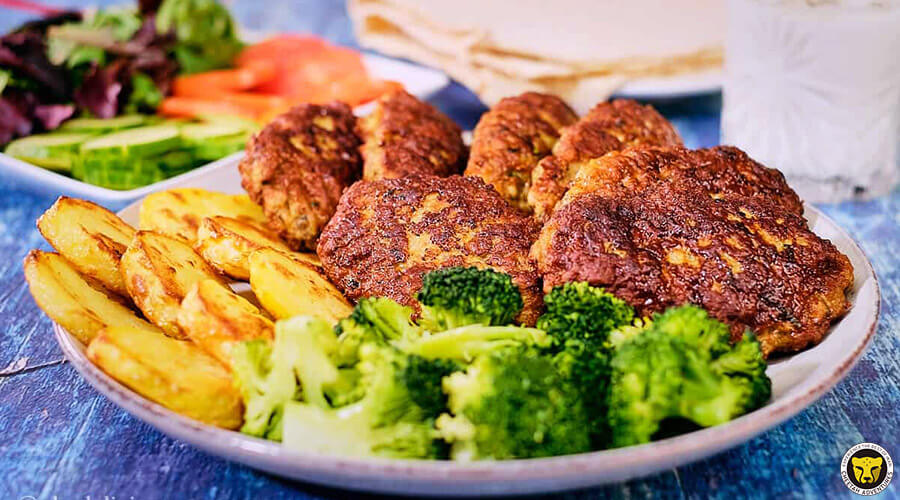 Turmeric is an anti-inflammatory agent, meaning it reduces pain and aids the liver.

From the family Apiaceae, both caraway and cumin can be used as spices in many dishes, especially in the Middle East. 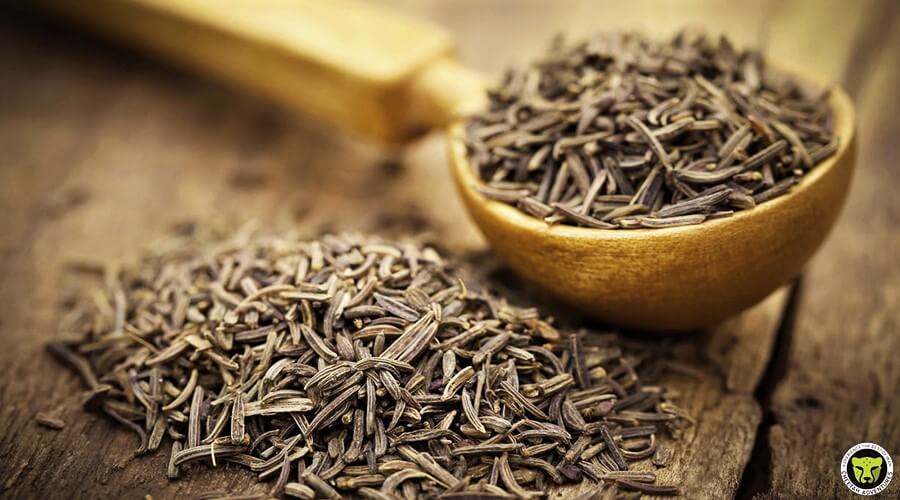 We use the dried fruits of this plant – that we call Zir-e in Farsi – as a spice for chicken stews, soups, broths, deserts, or traditionally made breads, cookies, or even cheese. It is a great addition to Addas-polo (Lentil and rice dish with beef) or Aash-e Zire too because it helps with digestion in dishes that contain legumes. Or we might brew it as tea, for children with an upset stomach. Persian Hogweed, which we call Gol-par or Golpar in Farsi, is a flowering plant called Heracleum persicum that is native to Iran. In English, some call it “angelica,” however it is not related to the spices of that family.

In Iran, we add a few flakes of dried seeds to broths to add flavor. 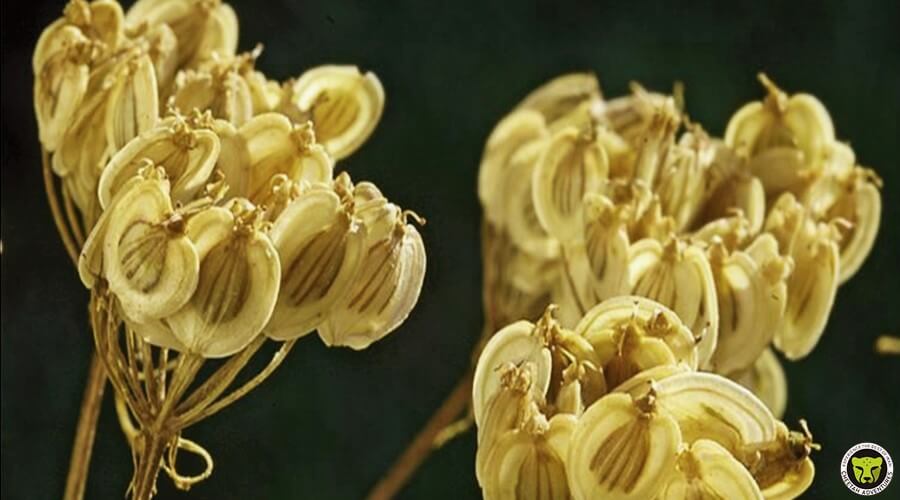 We also put it in Torshi of all kinds, which is a term for a sour and salty Persian side-dish. Golpar can be brewed in a tea mix too, because of its antioxidant effects and benefits for digestion and the cardiovascular system.

We also bring Gol-par to the table sometimes to add to baked broad-beans.

On Yalda Night, pomegranates with Golpar are indispensable components of our family gatherings’ snacks. 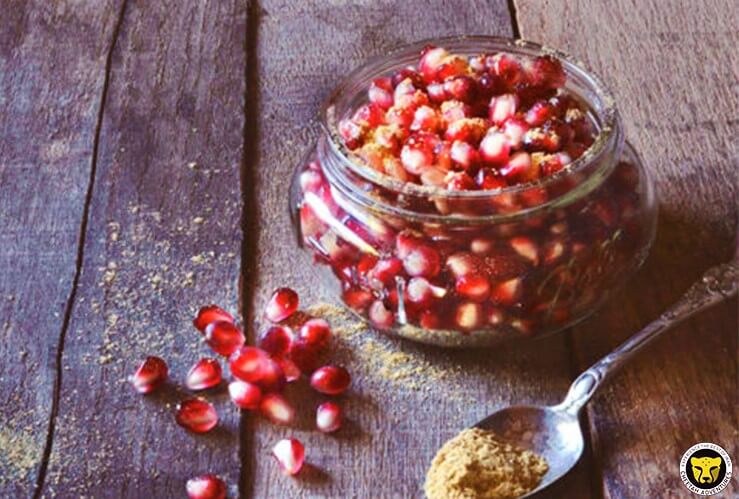 Saffron is a much-beloved spice that Iranians utilize in their cuisine. We pride ourselves in the distinct aroma of Saffron and its rich yellow color.

Saffron is produced from the stigmas of the flower Crocus sativus. This is the part of the plant where pollen germinates. Each flower only produces 3 stigmas, therefore it takes a lot of labor to produce this precious spice. Iran is famous all around the world for its cultivation of saffron. Most of the saffron Iran produces comes from Khorasan Province, in northeastern Iran. 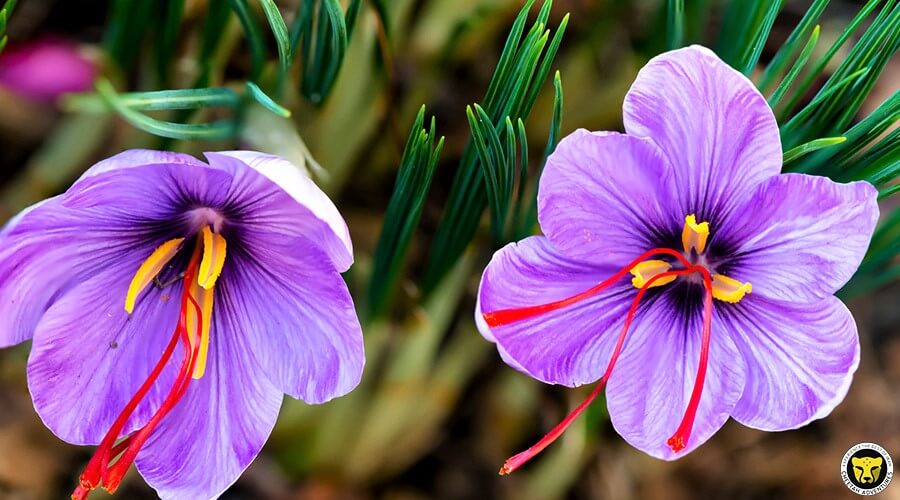 To cook with Saffron, we Iranians like to put saffron in a little amount of boiling water to draw out its color and then add it to plain rice. We also put it in Tahchin, which is a rice and chicken dish, in Kookoo Sibzamini, or Zereshk Polo; along with a lot of butter. But it is not only savory dishes that we cook with Saffron; all sorts of deserts too. Naan-Berenji, the traditional sweet of Kermanshah, Qottab pasties of Yazd, Sohan-e Qom, Kolompeh (date pastry) of Kerman, and the Masghati of Shiraz, all contain Saffron as one of the signature ingredients. (Read more about TOP TEN IRANIAN SWEETS) 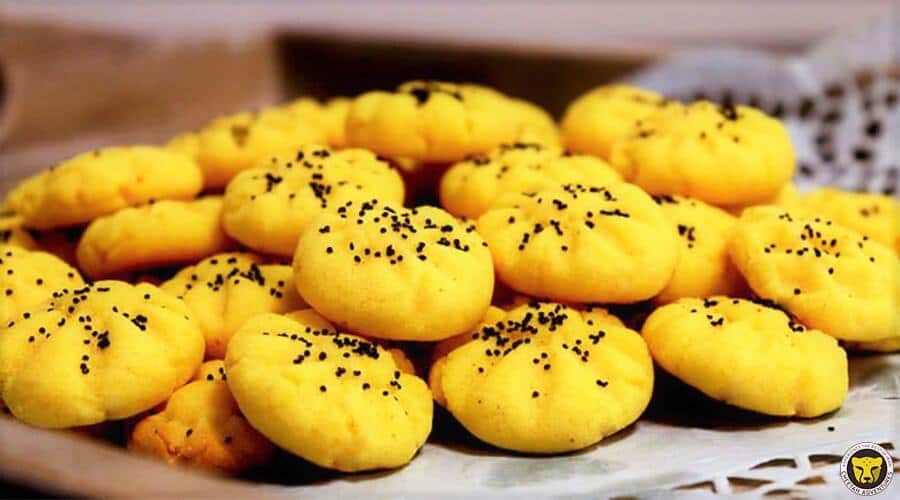 If anything else needs to be said about Iranian’s love of Saffron, let us look at this delicious Saffron Tea and Saffron ice cream. We call Bay leaves “Barg-e Boo,” which translates to the “leaf of scent.” It is often that Iranians use whole dried bay leaves to enhance the flavor of their stews along with whole onions and turmeric. 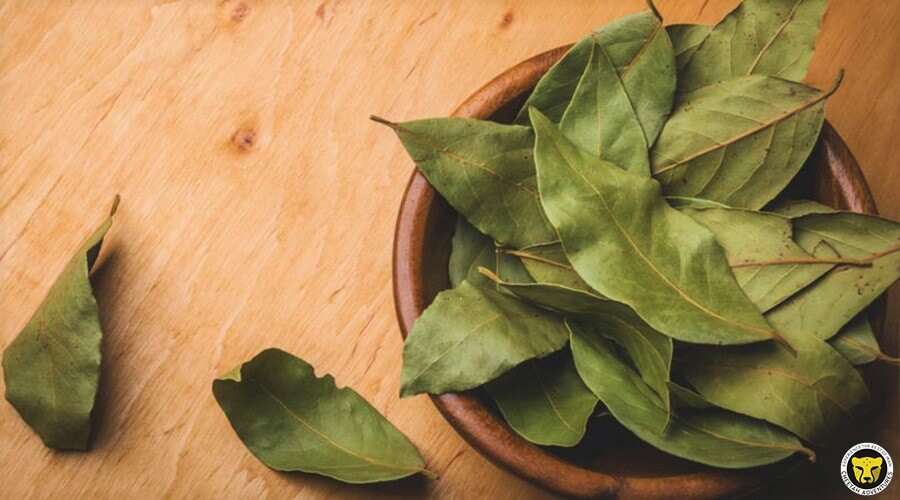 We like to add onions and dried bay leaves whole so that removing them from the stew before serving the meal is easier.

For a simple beef stew, for instance, caraway, bay leaves, coriander seeds, and butter can make an excellent combination.

Bay Leaves come from a Mediterranean evergreen tree called Laurus nobilis. It is said to boost immunity and reduce stress. It is rich in vitamin A and fights the body’s free radicals, which means it helps prevent cancer.

The citrus tang of dried lime does wonders to enhance the rich flavor of Gheimeh or Ghorme-Sabzi.

This fruit is called Shiraz Lime or Persian Lime. Regular lime and Limoo Shirazi are very easy to tell apart, because of their size difference. Limoo Shirazi is small(about 5 cm in diameter), round, and green; whereas yellow limes have a more oval shape and can be as big as 12 cm in length. We process the Persian Limes by boiling them in diluted vinegar and leaving them to dry, or by simply letting them completely dry out while still on the tree. The resulting wrinkled, dehydrated fruit might later be powdered or crushed slightly so we can add it to stews. In the southeast regions of Iran, in provinces such as Jahrom, Bandar Abbas, and Shiraz, limes are extensively cultivated. Our hospitable Jonoobi countryfolk (those from the southern areas of Iran) savor this spice’s sour taste widely and use it commonly.

Black Lime or Limoo Amani is popularly utilized in many Middle Eastern dishes, in Bahrain, Qatar, Iraq, and of course, Iran cuisine.

Nutmeg is the ground seed of a tree of the same name that we use as a spice and condiment. Nutmeg is very popular in tropical areas. It is rich in iron, potassium, magnesium, and many types of B vitamins.

We use nutmegs in steaks, salads, stews, and soups. It goes well in Loobia Polo (green bean and rice dish), and Gheimeh. However, due to its sweet flavor, we love to add it to desserts more than savory meals. For sweet bakes, pancakes, and even fresh fruit or oatmeal, nutmeg can be a lovely addition.

For example, a beloved dessert of Gilan is Resht-e Khoshkar. This is a light dough that is cooked, filled with a sweet filling of ground walnuts, sugar, cardamom, and nutmeg. Then it is fried well and decorated with pistachios and almonds. Sometimes, to make a bit of change, we like to infuse our afternoon tea with spices like nutmeg. We add a tiny amount of powdered nutmeg (less is more) into our black tea blend and let it infuse for 5 minutes.

Cinnamon is widely used all around the world and requires little introduction.

Cinnamon is produced by pulverizing the inner bark of the trees of the genus Cinnamomum.

Iranians routinely use this condiment in their cooking. To most chicken broths and stews, to soups, and deserts. For example, Baghali-Polo Mahi-che (green rice with beef stew) can never be completed with its signature taste of cinnamon. 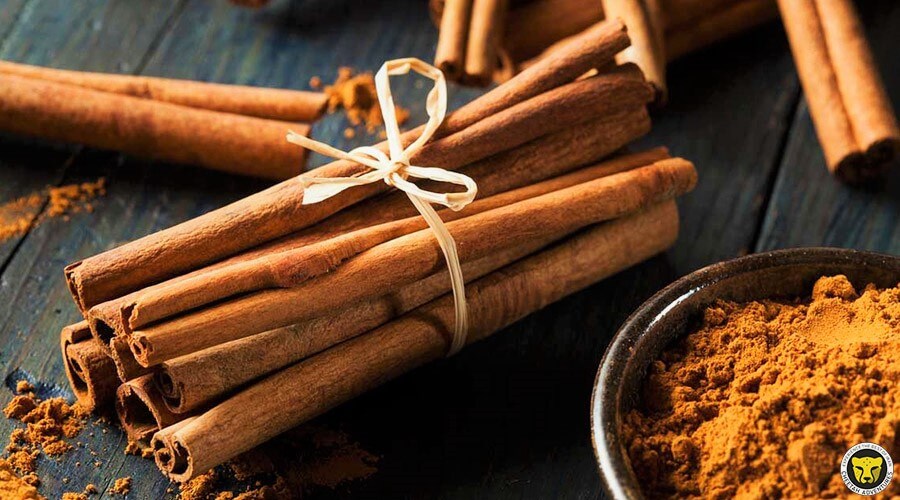 Cinnamon, or Dar-chin, as we call it in Persian, is a strong antioxidant and can help prevent cardiovascular diseases. It also aids digestion and provides nutrition for the body; because it is rich in elements like potassium, calcium, and zinc.

Thyme comes from the family Lamiaceae. In some areas of Iran, certain species of this family grow like wildflowers in our mountain ranges. In the cities Eqlid, located in Fars Province, FereydunShahr in Isfahan Province, Kookherd in Hormozgan Province, and other towns of these regions, several aromatic wildflowers grow including Persian Thyme or Zataria multiflora.

Our country folk who know their way around the slopes and recognize the benefits of these plants, claim that the best time of year to harvest is Ordibehesht (April / May). Since their place of origin is the mountain, we call the spice “Avishan-e Koohi;” the word Koohi meaning “belonging to a mountain.” 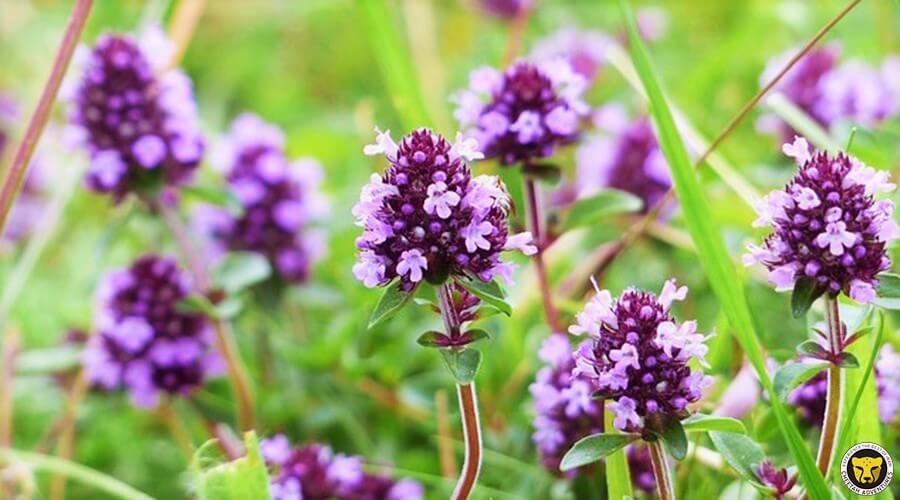 We like to add Shirazi Thyme to our fried dishes, soups, and snacks.

And just like we do with other spices and herbs we named, Iranians love to make tea with thyme. A single small stem of thyme dropped into the black tea of afternoon will make wonders to brighten the day.

Those are the top ten spices and herbs of Iran! Cardamom, Ramsons, wild leeks (Tare-ye Koohi), Poone-ye Koohi, and sickleweed(Qaziaq-e) all get honorable mentions too, because we consider them lovely additions as well. 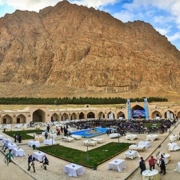 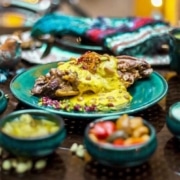 Top 10 Persian appetizers and side dishes 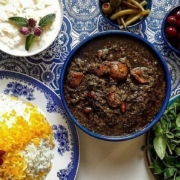 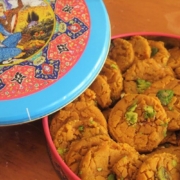