Sizdah Be-dar is celebrated on Farvardin 13 as an ancient tradition of Nowruz. On this day, people go to green spaces and celebrate the last day of the Nowruz holidays out in the open. In Iran’s official calendar, ever since the Islamic revolution, this day has been referred to as the Day of Nature; a national holiday.

What you will read about in this article:

The peoples of Ancient Iran were of the belief that Jamshid, the king of Iran who founded Nowruz, initiated the tradition of Sizdah Be-dar by spending time in the green nature under canopies and in the company of the people, every year. The tradition was established after a few years across all of the country.

Ever since then, after twelve days of rejoicing the beginning of the new year which symbolized the twelve months to come, Iranians took to plains and woods to celebrate the last day of their holidays with a bang.

The thirteenth day of every solar month in the Persian Calendar is called “Tir Ruz”; named after Tishtrya, the star associated with rainfall. Iranians have chosen to celebrate the first Tirgan of the year as a blessing. 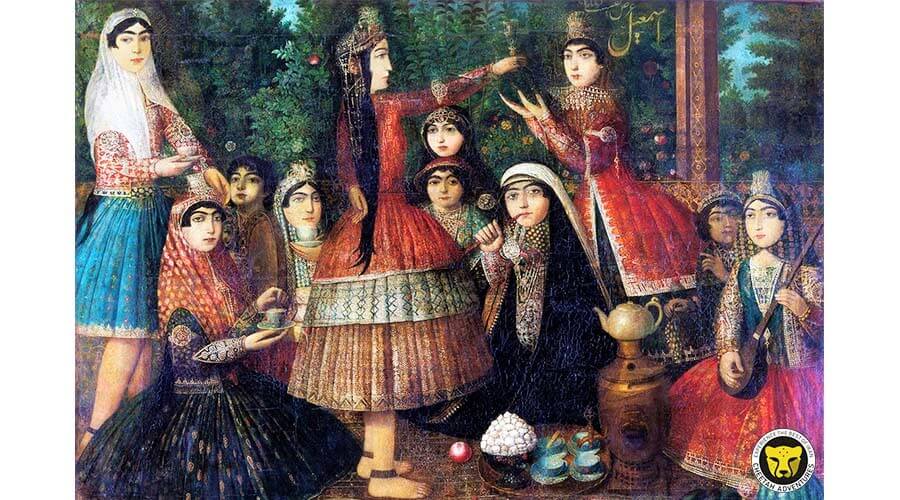 A painting of 13 Bedar in Ancient Persia

Persians in the old days thought the number thirteen to bring terrible luck. In astrology, they believed there were twelve houses, each birth assigned to the goddess of the house. Therefore, the fortune and disposition of that individual would form under the influence and authority of their goddess. The number thirteen was a bad omen because it did not fall under the dominion of a goddess and a house. Persians believed that for this reason, they must leave their homes on the thirteenth and spend the day out in the open to avert misfortune. Nowadays, however, most Iranians do not believe that the number thirteen is unlucky and consider it an old superstition.

The bad luck surrounding the number thirteen and people’s wish to avoid it is deep-rooted in the culture of many countries and amongst many peoples. Christians, for example, would never dine at a table of thirteen guests.

To the Tāzī, still, the thirteenth day of each month is poor luck.

The Cathars, on the day of Easter, which sometimes coincides with Farvardin 13, would leave their houses to spend time out in the open and by their fields. They would bring with themselves boiled eggs to have for lunch. These days going on an Easter Egg Hunt is a fun tradition for children. There are three similarities between these two rites: 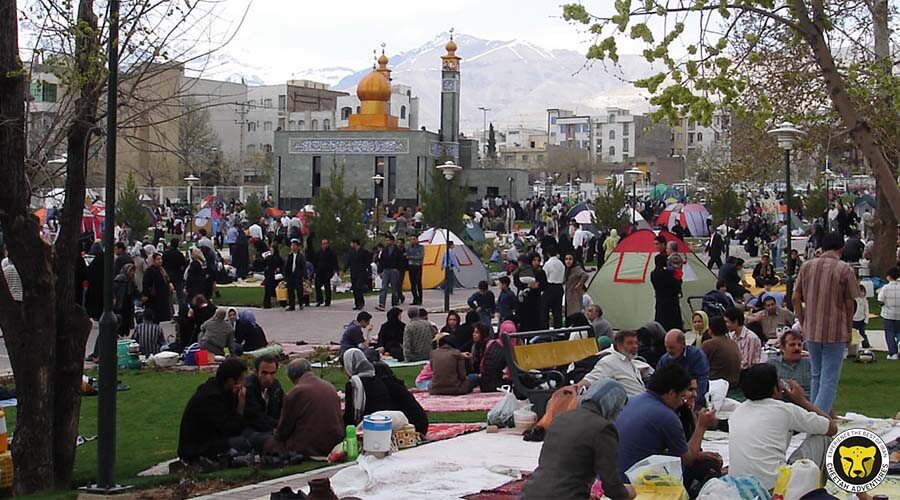 Farvardin 13 belongs to the Goddess of Rain. There existed a tradition in Persia to pray for plentiful, timely rains on the thirteenth. This tradition has died out over the centuries.

Americans spend April 1 playing tricks and fun pranks on their friends and joking around with them.

The British think that bad luck goes to someone who tries to pull a prank on a friend in the afternoon, because by this time everyone is already prepared, and will not be taken by surprise. The prank will fail.

In India, a festival called “Holi” or “The Festival of Color” is customary on the day before April 1. In Portugal, people throw flour at each other in their fun flour-bombing celebration of April 1. The French have a tradition for April 1 called  “poisson d’avril”, or “fish of April.” They stick a piece of paper on their unsuspecting friend’s back that has a picture of a fish. This is to say that this poor friend is simple and gullible. 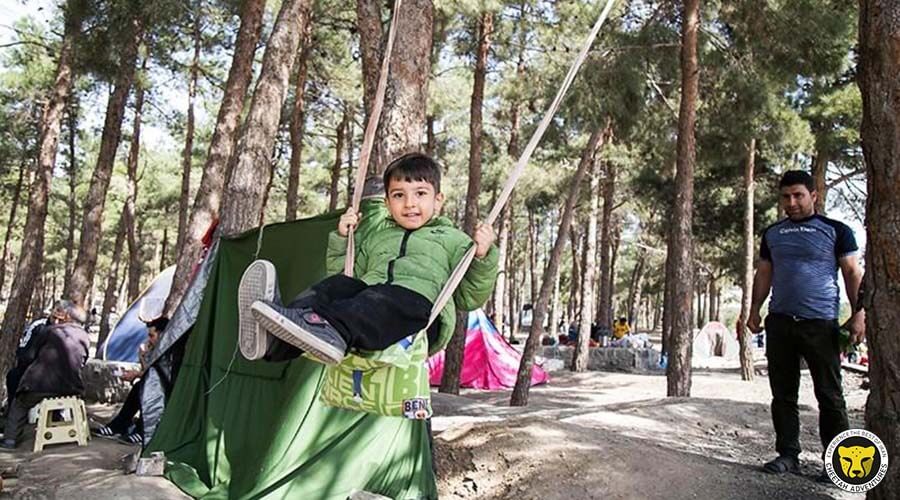 Tying knots in the grass

The tying of knots in the grass may also signify striving to form a link between life and nature. 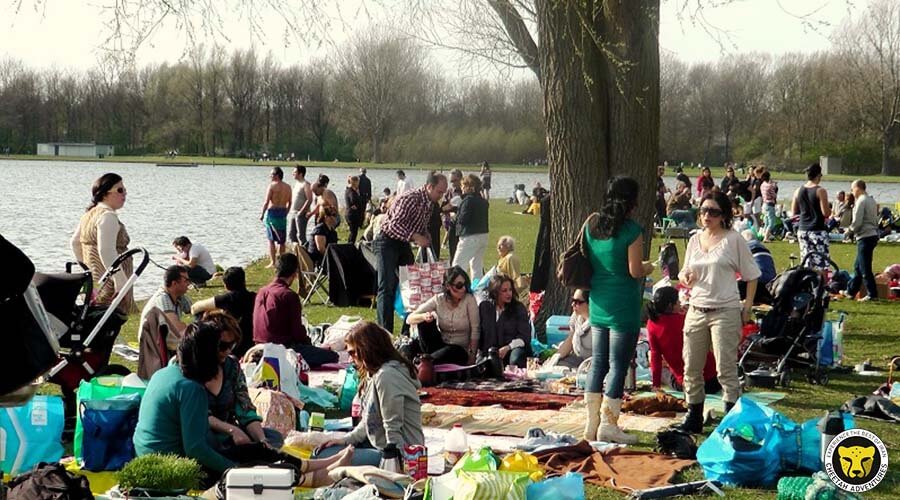 Throwing of the Haft Sin Sprouts to Running Water

Ancient Persians were of the belief that all woes and miseries are absorbed by the freshness of the Sabzeh (sprouts) that they put on their Haft Sin; therefore it was necessary to cast the sprouts into running water.

In regions populated by the Kurdish people, it is traditional to throw thirteen pebbles behind one’s shoulder to rid oneself of bad luck. The people also make one wish for each stone they throw. 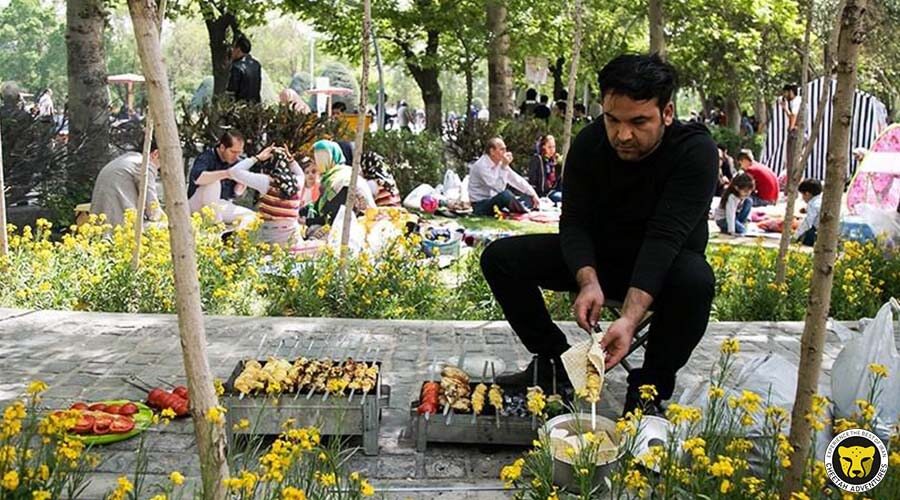 Another tradition of Sizdah Be-dar is to prepare a type of Aush (or Aash) to later distribute among neighbors. This is to wish everyone a safe and joyful Sizdah Be-dar. Overall, it is common practice in Iran to cook Aush and then enjoy it whilst outdoors and in nature. Another popular dish, particularly among Kurds, is Dolma (or sometimes spelled Dolmeh) ye Barg-e Mo.

It is customary to finish up all the trail mix leftover from Nowruz during Sizdah Be-dar.

The Kahoo Sekanjabin is another interesting snack for this day: lettuce (kahoo) dipped in the sweet sherbet of Sekanjabin. Based on Persia’s traditional medicine, these two ingredients have opposing humor. That is why they must be taken together to counter bad effects. 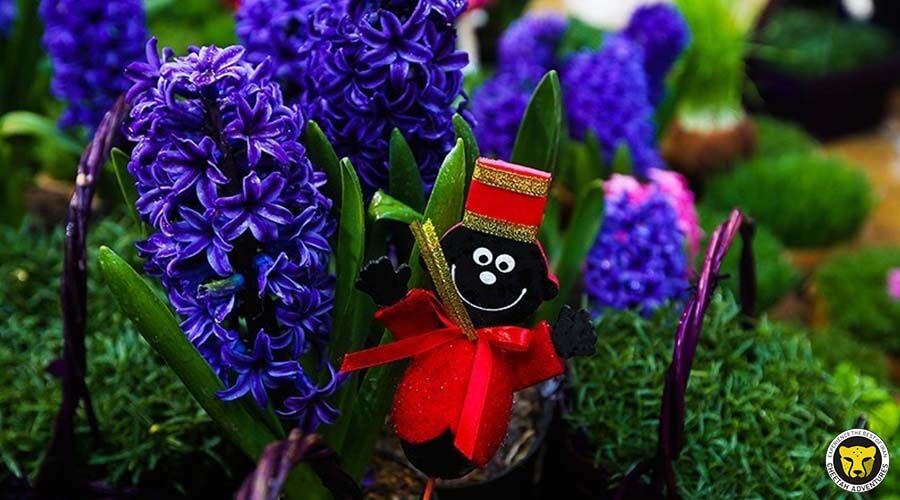 Nowruz, with its familial traditions, brings its rites and ceremonies to the community and nourishes the bond between the people in two ways: through the Chaharshanbe Soori celebrations, and Sizdah Be-dar gatherings, which are both emblematic of collective solidarity. 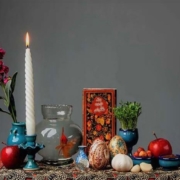 History and the Cultural Aspect of Nowruz in Iran 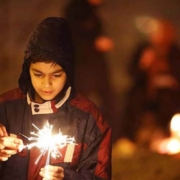